#Autism does not mean a free pass for my kids

We received a little bit of distressing news today

#Autism does not mean a free pass for my kids


Gavin’s had a really rough weekend.  I’m not referring to his health but his behavior instead.  We haven’t actually seen him like this in a really long time.

I suppose you could say that he’s been very impulsive and that wouldn’t be inaccurate.

It would also be accurate to say that he wasn’t thinking before he opened his mouth as well.  In fact, that’s the main issue we were having there past few days. 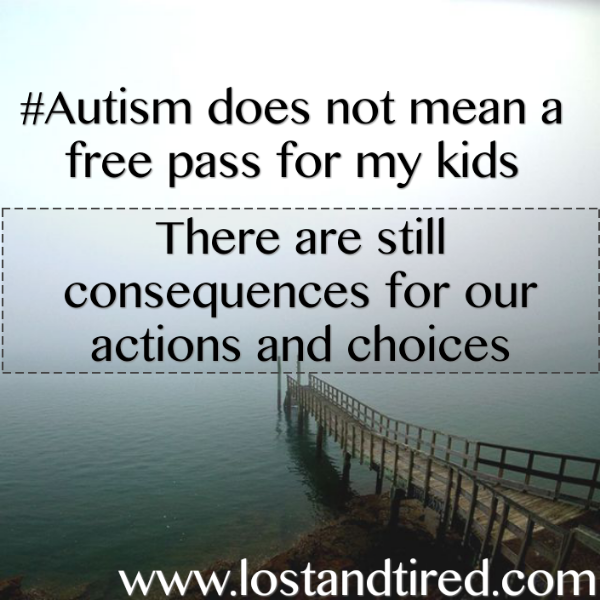 This afternoon it finally came to a head when he began telling Elliott about the spinal tap he had done a few years ago.

It’s important to know that Elliott struggles with extreme anxiety.  Needles, doctors, blood or anything like that sets Elliott down the path to not sleeping for the next couple of days.

His anxiety is so bad that he’s being medicated for it.

This afternoon I was upstairs, across the hall from where the boys were playing.  I was sorta lost in what I was doing until I heard Gavin start telling Elliott about what happened to him during his spinal tap procedure a few years ago.

As soon as I realized what he was doing I shouted at him to get his attention and stop him dead in his tracks.

Next thing I know Elliott is walking out of his room with this terrified and panicked look of his face.  Gavin is standing there, completely oblivious to what he had just done.

Lizze and I spoke with Gavin privately and sorta dug into him a little bit because he knows he’s not supposed to speak to his brothers about this stuff.  He just wasn’t thinking or maybe he was…. With Gavin you never know what his motives are.

I happen to think that he’s not exactly emotionally stable at the moment and he was likely not thinking before he opened his mouth.

That being said, there are still consquesces for our choices and he lost his screen time for the rest of the evening.

I doubt that any lesson was learned but that doesn’t stop us from continuing to try, in the hopes that one day something will click with him.

It’s a great deal of repetition, repetition and more repetition. I am very often ready to pull my hair out, what’s left of it anyway.

That’s amazing that you don’t enable your kids. It would be kind of hard for me if i was in your situation.

There was a great article in the NYT magazine yesterday called “Animating Owen” about how a family used an autistic child’s obsession with Disney characters to draw him out emotionally.  I was thinking about Gavin and his obsessions and wondering if you had heard about the author (Ron Suskind).  I think he has a book coming out about it.