Unboxing Video for UP24 by @Jawbone


Today was a pretty sad day because Gavin’s further losing his grip on reality.  It seems that Schizoaffective Disorder is once again taking over his life.

Here’s where Gavin spent his day today.  According to Gavin, this is what he happened.

At some point this morning, he got a call from Sonic, the most prominent of his visibly challenged friends. 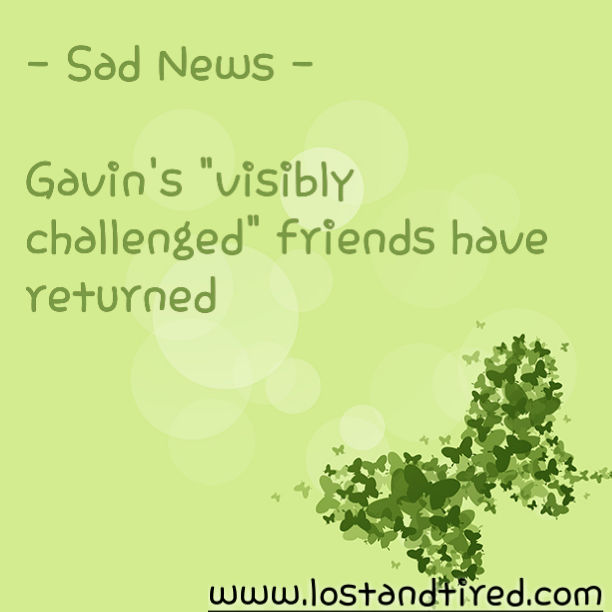 Sonic the Hedgehog and his wife Amy had a problem and they needed Gavin’s help to solve it.  According to Gavin, Sonic and Amy are married and have a son named Jack.  Jack is 11 years old.

About 3 months ago, Sonic and Amy welcomed a new addition to their family.  Her name is Samy (rhymes with Amy).

Samy is now 7 years old and had a soccer game today.  It was a tournament game…..a big one. .

In case you missed it, Samy was born three months ago but is now 7 years old.  When I questioned him on how that happened, he started to tell me that while he was on a mission with Sonic,  he was severely injured and had to frozen in order to heal.  His explanation made no sense to me but that’s what he said.

The reason Sonic had called Gavin today was because Samy had a soccer game. Sonic and Amy both wanted to be there to watch it, but there was a problem.

Apparently, Sonic needed a few things from the store and it had to be done right away.  If Sonic went to the store, he would miss Samy’s game.  Whatever he needed to get was really, really important but so was the soccer game.

Gavin realized that he could save the day by going to the store for Sonic, so that Sonic and Amy could both go to the game and cheer on Samy.

That was it…..  He wouldn’t tell me what he had to get at the store or why it was so important.

Are you confused yet? Join the club.  It’s so heartbreaking to watch him decompensate like this.  If there has to be a silver lining here, it would be that he’s happy.  When he’s with his visibly challenged friends, he’s happy and as terrible as this situation is, at least there’s that.

He did say that he would fill me in the rest of his adventures later on today. I’ll keep you posted.  In the mean time, please keep him in your thoughts and prayers.

Many professionals told me to treat my son’s hallucinations as if he was reporting a fever. Accept the information…then encourage him to move on. They were correct; in my experience that was the best policy. My son has the same diagnoses as yours…but mine is now age 26 and no longer experiences the hallucinations. I absolutely understand your interest in hearing what your son says, asking questions, wanting to understand how he is thinking, how he is coming up with these hallucinatory characters. But the better course of action is to help him change the subject in his mind. There were times that I played cards with my son at 5 in the morning because that was what he needed to focus on something other than the voices in his head. If you haven’t already, contact your local NAMI and attend their “Family to Family” course. It includes an excellent example to help family members better understand what it is like for their loved one to experience “voices”. These are a symptom, just like fever is a symptom.

Keeping you and your family in my thoughts and prayers. <3 Here’s wishing you a beautiful day.