When you have to tell your son that he could die -

When you have to tell your son that he could die

Lizze and I had it out with Gavin today.  I’m already on edge and we all know where Lizze is.  I’ve been talking lately about how it appears that Gavin’s been faking some very, very serious symptoms to his very, very serious health problems.

I’ve had it.  I can’t play nice anymore because sometimes tough love is all you have left to give. 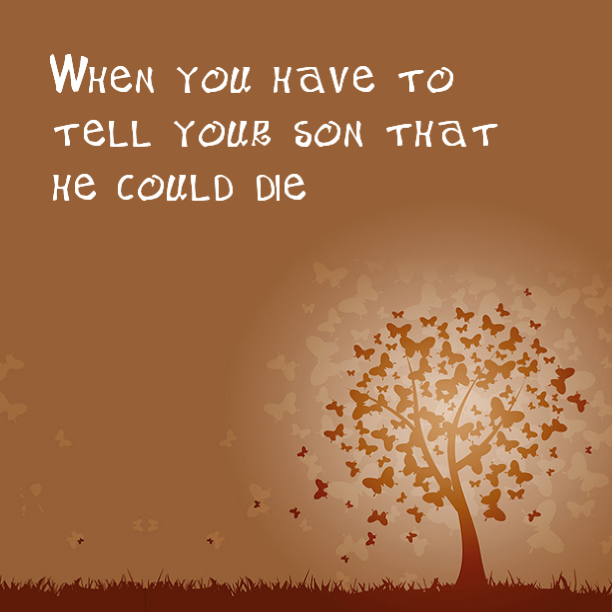 Basically Gavin’s been telling us that he’s collapsing while at school.  His definition of collapse is falling to the floor and landing on his knees.  He understands what it means, so that would seem to rule out his simply misunderstanding the word.

Why do we think he’s faking?  Well, for starters, he’s got a very, very long history of what is being referred to by his therapist as compulsive lying. .

He’s telling his teachers at school one thing and then telling us something different.

He’s told his teachers that he felt like he was going to collapse and then tells us that he actually collapsed to the floor.  This makes his teachers look like they aren’t taking him seriously, when they are only going off of what he’s been telling them.

In fact, of all the times that Gavin has claimed to have collapsed to the floor, not one single person has ever witnessed this.  In fact, on at least one occasion, it was witnessed that Gavin walked to the drinking fountain to fill up his zippy and simply leaned up against the wall.  Unbeknownst to him, a very, very trustworthy teacher had been watching him.  She asked if he was okay and he told her that he had just collapsed to the floor.

I have a really hard time NOT believing this particular teacher.  She’s easily among the most amazing educators I’ve ever known…..

Aside from him being dishonest, here’s the problem.

Gavin suffers from a very rare Autonomic condition where at any point in time, his Autonomic system can stop working.  We’re talking his blood pressure crashes and his heart rate skyrockets to compensate. His body simply shuts down and he’s had to be hospitalized many, many times.  This is called an Autonomic Crisis and these are extremely rare and essentially untreatable.

When these occur, they can last for minutes or days.  The record has been about 4 or 5 days and damn near cost him his life.

Every single time he goes into a crisis, there’s a very real chance that he can die.  The only thing that can be done is essentially supportive treatment because there is no way to repair his brain.

He can months without a single problem and then out of nowhere, he’s in the hospital.

While he’s been relatively stable lately, there have been signs that this condition is getting worse.  Recently we have had to transfer his IVIG Infusions from the out patient infusion lab at Akron Children’s Hospital, to our living room, every Friday.  This is because he wasn’t tolerating the car ride to the hospital and was having to be hospitalized on a fairly frequent basis.

When he says he’s collapsing to the floor at school, panic immediately sets I’m because this means that things are likely getting much, much worse and he needs to get back into the Cleveland Clinic.

Hearing that he’s collapsing at school is among my worst fears because it really shows just how fragile his health is… This literally keeps me up at night….

I can’t even begin to explain the amount of anger and betrayal I feel upon finding out that it’s very likely that he’s making these new symptoms up.  I literally shake just thinking about what all this has been doing to me personally, not to mention everyone else that loves and cares for him.

The real kicker is that he could be telling the truth. This could actually be happening. What he’s saying is absolutely plausible and that’s what I find the scariest part of all of this.

I flat out told him today that if he lies to us about these symptoms, he could die.

I don’t think he gets it……  We’re meeting with his therapist tonight, to make sure that we get this point across to him.

Also, because this is so serious and could very literally be a life and death situation, we are going to speak with his specialist in the morning and find out what we should be doing at this point.

Tough love and major reality check is in order.

For me The respect and the honesty disciplines and love are the basis of my family , I agree to tell Gavin ,what’s going on with his health , hurts really deep because when you verbalize your thoughts they come to life and become real , and painful . I send. You Compassion and love for you and your beautiful family

You’re doing the right thing – honesty is always the best policy… whether he fully understands this or not is entirely out of your hands as well – i can say hang in there, but sometimes the words are useless and condescending… i send your family love and compassion at this time xx

It sounds like Gavin needs a 1:1 support at his school, not only for his personal safety but also posterity. If the school cannot swing that, maybe a notebook that every teacher in everyone of his classes can write in to report how he did that hour. If you choose to go the notebook route, make sure the notebook is only handled by teachers throughout the school day and only given back at the beginning and end of the day.

Also word to the wise: Be very careful about how you tell Gavin about his illness. I have had major health issues in my life. I have a rare metabolic disorder that affects roughly 1 in 80,000 people born. It damn near killed me when I was little and when the dust finally settled the child I had once been was no longer. My mother thinks I had a stroke around 3.5 years of age which would make sense because in photographs that I have from around that time showed drooping on one side of my face.

My point here being is that you don’t want Gavin to worry excessively about his illness. He’s going to need you emotionally when he realizes the gravity of the situation, I truly believe he will understand at some point and when a person, particularly a teenager, realizes that life is NOT a guarantee, it can be devastating. I spent a whole summer worried about my disorder and if it would kill me that year. Obviously it didn’t and can honestly say it was one of the most humbling experiences I’ve had in my lifetime.

Also I sent you an e-mail with the E-mail address that you posted on Facebook because I didn’t feel comfortable sharing certain pieces of information on the internet, so I don’t know if you got it or not. Please let me know if you can.

I think it’s great  you are talking to a therapist about this.  You don’t want him to fear for his life every time he goes to the water fountain — and a therapist will be able to frame the problem in a way he can take in.

Are there cameras in his school?  My DD has POTS in addition to Aspergers, and much more.  Cameras in the halls have helped us a couple of times.