When you have to tell your son that he could die

I barely slept last night because I was too worried


So we met with Dr. Pattie tonight and had a really important discussion with Gavin about being honest.  This was necessary because of his recent health related symptoms that he claims to be having at school.

I say claims because we’re about 95% sure that everything he’s told us has been bullshit. 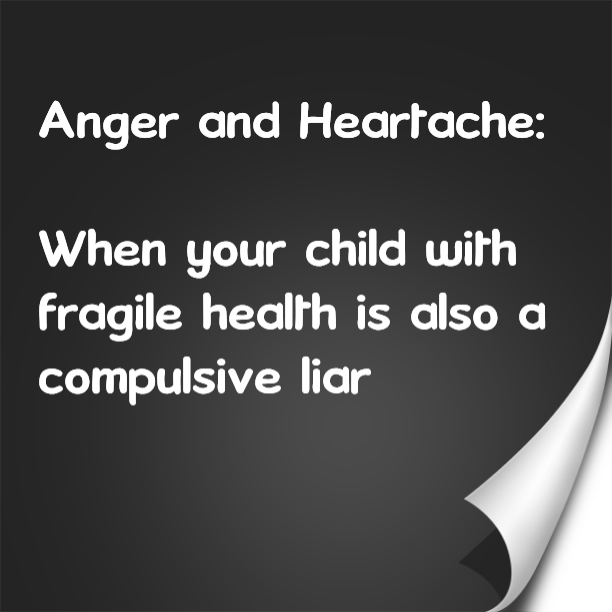 Unfortunately, there’s no way to truly know for sure and because of how extremely serious this is, we have to take this seriously.

We spoke with Gavin at length and we were trying to get a better idea of what if anything is going on.

Gavin has a credibility level of zero because of how often he lies to us. We’re talking compulsive lying, not just little white lies about things that don’t matter. The problem with his story this time, is that he’s telling everyone a different story about the same incident and so no one knows what to believe.

As much as I truly need and want to believe him, most of me doesn’t.

Because what he’s telling us is happening is actually plausible, there’s still part of me that’s really worried that something is happening.

After spending well over an hour talking to Gavin about how serious this is and not being honest about this could literally cost him his life, it seems as though the effort was wasted.

Absolutely no part of me believes that we accomplished anything more than taking years off of my life because I’m so fricking stressed out over this. There is absolutely no way to get accurate, reliable or even remotely useful information from Gavin. I think that we’ve firmly established that.

At this point, Dr. Pattie, Lizze and myself have come up with an immediate course of action.

We will be speaking with the school and if necessary, modifying his IEP to reflect the need for him to have a buddy will him at all times.  If he needs to get a drink, his buddy goes with him.  This way we can have a witness to anything that happens and don’t have to rely on Gavin for anything.

That doesn’t prevent him for faking symptoms, which he’s been caught doing but at least if something goes serious does happen, someone can go for help.

Secondly, I will need to get a heart rate monitor that will continuously monitor and record his heart rate.  The watch I’m looking at will sync with my phone.  The goal would be that if he claims to have collapsed again, we can go back and see what his heart rate was at the time of the episode.  If his heart rate was normal for him than he’s likely not being honest.

On the other hand, if there is a sudden drop in his heart rate (which does happen), that would be an indication that something did happen.

That’s all we can do right now.

I should also add that Elliott and Emmett both approached Lizze and I today and let us know that Gavin has never collapsed when he’s been telling us he has, because they’ve been there when it supposedly happened.

It never occurred to me that they may have witnessed anything. However, they eat breakfast together every morning at school and Gavin leaves before they do to go back to his classroom.  They’ve never seen him collapse as he was walking to the stairs, like Gavin says has happened…

Elliott is so anxious and protective of his brothers that if he even suspected something was wrong, he would have known about it because he would be freaking out.
In fact, Elliott and Emmett are angry because they don’t understand why Gavin would say something like this happened when it hasn’t.

I’ll be totally honest with you..  I absolutely detest not being able to trust my son.  It feels unnatural to me and I can’t wrap my brain around this because it makes no sense for him to lie like this.

The reality is that it’s very likely a Reactive Attachment issue and I’m just going to have to accept that this is just the way things are.

I’ve not been this worried or stressed out in a really long time.

I love your ideas and I think that it will help Gavin. I hope that the teachers take this suggestion seriously and that Gavin is open to wearing the heart monitor. 😉

I think your ideas about the buddy system and the heart rate monitor are great. They should really help the situation.