When the school put her child with #Autism in restraints and injured him, this Mama Bear took action -

#PSA – Helping the Children of Our Fallen Heros

When the school put her child with #Autism in restraints and injured him, this Mama Bear took action

So I came across these two videos on Facebook and have been following this story a bit because this kind of thing happens all too often. Basically, Chase is a little boy with Autism and on the last day of school, he was injured by the school staff when they put him into restraints as a result of a behavioral crisis. Check out the heartbreaking video below.

This video absolutely broke my heart and angered not only me but countless others as well. I understand first hand how behaviors can get out of control but when a child is injured in the process by the adults that are supposed to be ensures his or her safety, something is not right.
Essentially what happened was Chase was forced to attend an awards ceremony with the rest of the school. Having not earned an award, he got very upset and his behavior escalated to the point where the teachers and staff chose to physically put him in restraints, humiliating him and injuring him in the process. Chase’s mom has been requesting that the school allow him to earn an award, even a fake one but obviously that never happened.
In my opinion, if this behavior happened at every single awards ceremony, the school is setting this kid up to fail by making him attend. Why couldn’t he remain in the classroom or do another activity during this assembly. The entire situation could have been avoided if the school used a bit of common sense and/or compassion. 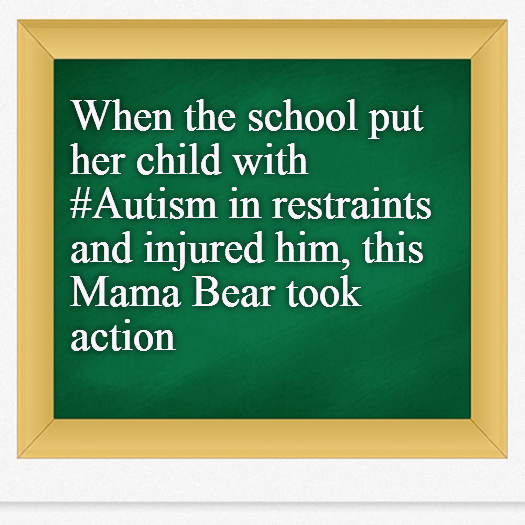 Chase’s Mom posted a follow up video later in the day to update everyone as to how Chase was doing.
She also talks about the IEP meeting she had the same day, as well as the doctors appointment Chase had as a result of his injury. You have to see how this Mama Bear handled the school at the IEP meeting because it’s awesome. I found myself cheering her on…
I think she handled this really well and has a right to be angry. While I don’t know this family personally, they seemed extremely involved in their kids lives and so parental involvement isn’t an issue.
Post by Toscano Interiors.
Look, I know our kids with Autism can be difficult to manage. I live with it every single day and while every child and behavior is different, having one of these kids is injured because of his or her adult caregivers is absolutely unacceptable. We all know that accidents happen but this appears to have been an avoidable train wreck and Chase’s bruised muscle and emotional injuries didn’t need to happen.
I want to know what this school is going to do to prevent this from happening again. Have they learned anything from this? Is there any accountability?
What I know for sure is that Chase has a whole lot of people rooting for him and his Mom is NOT someone to be messed with and that’s such an awesome thing…
What would you do if you were in the same situation and your child was injured by his teachers.

I am so glad this mama stood up for her son. I would be ticked off it happened to my child unless he/she was hurting someone or themselves.

Agreed. Even still though, if done correctly, no one should get hurt..

No child should ever be humiliated or harmed by a teacher, ever. That being said, where are the posts about the countless teachers who help their students thrive,love their students. spend their own money on supplies (happens every single school day) and find strategies to help their special needs students on their own? My sister is one of these teachers,where are the posts about teachers like her?