Today is a day of mixed feelings and fears


Gavin graduated to from 8th grade this morning after first receiving his Martial Arts promotion to 3rd degree green belt.

It’s hard to believe that he’s been there at Summit Academy for 8 years now.  So much has changed and yet so much has stayed the same. I wanted to share with you what we experienced this morning, watching him graduate.

This has been a bitter sweet day for me because while I’m proud of him for making it this far, I have no idea where he actually is academically and I’m worried about what’s going to happen as he enters high school in the Fall. 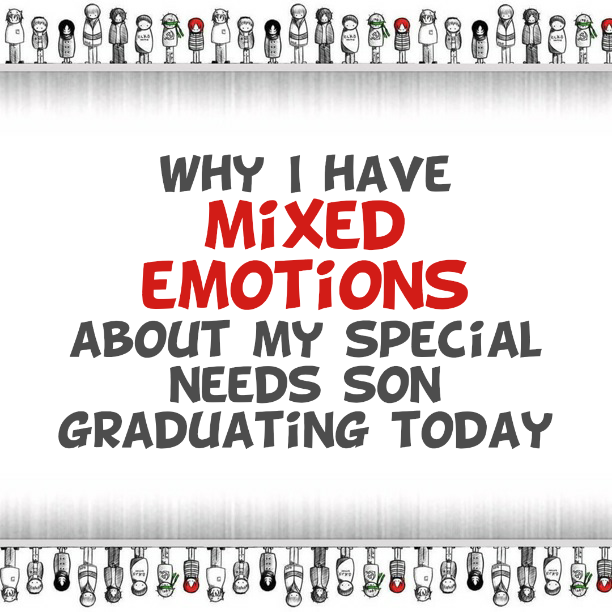 To be completely honest with you, I don’t even know if he will be going to high school in the Fall because we are trying to get him into residential treatment.

I imagine that it’s probably normal for a parent in my shoes to feel mixed emotions about something like this…… or maybe not.. I really don’t know.

There was a point during his Martial Arts promotion this morning, that I thought we were going to be spending the day in the emergency room.  Lizze, myself and some of the office staff immediately noticed that Gavin looked like he was going to fall over.

We came really, really close to pulling him from the Martial Arts demo they were doing because I thought for sure he was going into an Autonomic Crisis.

I think the demo ended before his body reached that point of no return, that would trigger a crisis.  Thankfully, he ended up pulling through and we went to lunch with my parents to celebrate Gavin’s victories.

Another reason it’s a bitter sweet day is because I have no idea what all his future holds. What I do know for sure about his future is quite frankly, really scary.  We’re entering a time where he’s no longer a little kid and will soon be held accountable for his behavior in a more adult manner.

That scares me to death……..

I’m proud of all he’s accomplished but I’m just really worried about where we go from here.  I believe that the high school will be a better fit for him and will help him because of the more ridged structure and focus on personal accountability.

In other words, Gavin will no longer get away with the stuff he got away with this year and he will have no choice but to apply himself the best of his abilities.

This is a hugely positive thing for him because as anyone with first hand experience dealing with a RAD kid will tell you, there has to be a very, very ridged structure in order to keep them in line.  Any perceived weakness will absolutely be exploited…

Lizze and I are really looking forward to seeing how he reacts to this new environment.  Gavin’s really excited and I hope that he transitions well because this could be such a positive thing for him and we are so grateful he’ll have that opportunity.

On a side note. Later on I’ll post the video of what we were seeing during Gavin’s promotion this morning.  I have to cut it out of a larger clip first.  You’ll be able to see why we were so worried about him.

He’s doing fine now and that’s something else to be grateful for as well.

i love good gavin videos. i am glad he pulled out of what ever was happening.

Thanks Raynette. I’m glad he pulled out of as well.

So proud of Gavin, my heart goes out to you for all the feelings and fears you are experiencing. You’re a great dad, Rob.

Thank you Val. I truly appreciate it… 🙂

Lost and Tired
Reply to  tannawings

Thank you. I’ll pass that along.