The last one standing


I’ve received a few questions today about the legendary squishy couch I refer to from time to time.  I thought I would explain.

For those of you out there wondering what I’m referring to when I say squishy couch,  this one’s for you.

The Squishy couch was born out of necessity.  Originally,  when Elliott was having a really hard time sleeping and we ended up down stairs in the middle of the night,  I needed a way to make him feel safe.  He would wake up with the sensation that he was falling and be terrified.

So one night I decided to try pushing the couches together.  I explained to him that there was no way he could fall now..
It worked,  thus the squishy couch was born.

This week,  with everyone being gone and Emmett upset that he doesn’t get to go anywhere and spend the night,  I suggested squishy couch and he jumped up and down with excitement.

Honestly though, it’s not very comfortable with our crappy old couches.  Having said that, the kids are happy and that makes it more than worth it.

Please take a second and bask in the awesomeness that is the squishy couch.. 🙂 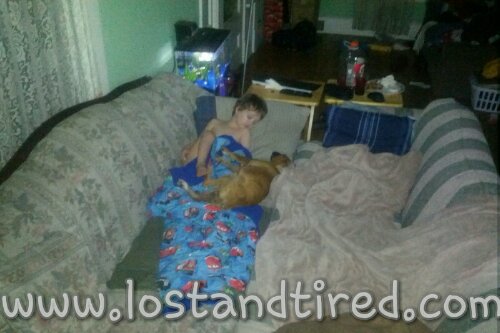 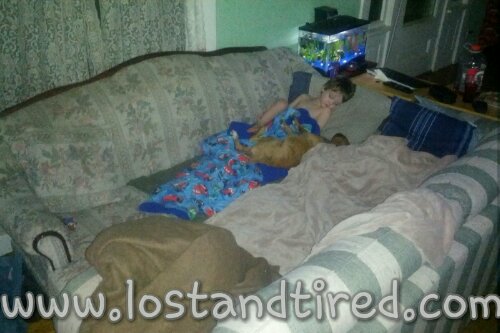 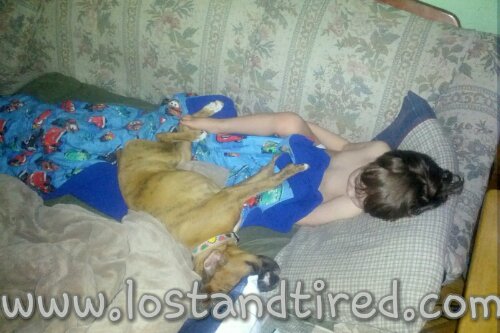 Posted from WordPress for Android so please forgive any typos as auto-correct and I don’t see eye to eye. 🙂

Sweet! My boxer used to sleep exactly the same way – often trying to push me out of bed with her feet!

Too cute. x3 I totally understand the comfort that being surrounded brings, especially when you do get that falling sensation in the middle of the night, or random hypnic jerks. I miss the days where I was small enough to sleep in between two couches like that. x3