Can anyone out there relate to this? -

Challenge of the day: Return the grocery cart

Too sick for a sleep study

Can anyone out there relate to this?

As intelligent and wise as Elliott is, especially for a 6 year old, he clearly doesn’t understand some things as well as I thought.

When I say Elliott is wise, I mean that.

He’s very difficult to talk to about some things because he wants grownup explanations for things and simply won’t settle for anything else.  Sometimes that’s okay and other times, not so much.
Even his psychologist has trouble explaining things to him at times because he’s not satisfied with the answer because he knows there’s more to it than that.

This is one of Elliott’s aspergers traits.

The truth is, if you talked to him like an adult, he would better understand what your trying to tell him..

Unfortunately, it’s easy to forget that he is only 6 years old.  We walk a really fine line with him in this area because we want him to be a kid but he’s so much more intelligent and insightful than most kids even twice his age.  It’s difficult to find that balance where he’s allowed to be who he is and yet he can still be a kid and not have to worry about grownup things.

Does that make any sense to you?

Elliott came home from school today and went to hang out with his grandparents.  When he came home, he had a paper in his school bag that just broke my heart.

Elliott was asked to write down his New Year’s Resolution.

Usually New Year’s Resolutions revolve around doing something  better or different.  Most people want to improve on something in their lives or give something up.

Elliott’s resolution was to try to not be allergic to almonds.  As soon as I saw this I sat him down and made sure he understood that his tree nut allergy is not his fault.  He says he understands but I don’t know that he really does.

It’s moments like these that through the tears in my eyes, I see that he’s just a 6 year old little boy.  Most of the time he acts so much older and I don’t always get to see this side of him.

Can anyone out there relate to this? 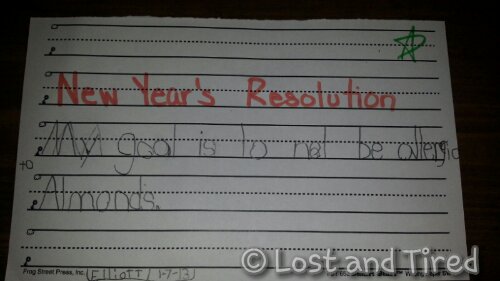 Just a thought but does he properly understand what a New Years resolution is? Could he perhaps be thinking of it more as a dream or a wish? Or maybe he already gets that often adults make resolutions that don’t happen lol

You know, that’s a really good point. :-)Both of them really. 🙂 lol