@AkronChildrens made our Holter Monitor process quick and painless

This is a great example of autonomic dysfunction


Gavin had his first tantrum since returning home, this morning.  Lizze and I had just walked into my parents house to pick up the boys (I suppose it should preface this with, my Mom was watching Emmett and Gavin while we ran to the store).

We were in the house for only a few minutes when Gavin began screaming like someone has chopping off his friggin fingers or something.

In a panic, I ran to the back of the house to where he was, unsure of what I was walking into but it sounded serious.

What did I find? Gavin sitting there watching TV.

First of all, Gavin didn’t realize that we were there and I caught him off guard when I ran back to check on him and not my Mom.

Secondly, he screamed for absolutely no reason.

He wasn’t hurt and he wasn’t upset. I don’t know what he was thinking, if anything at all.  I was pretty ticked off. 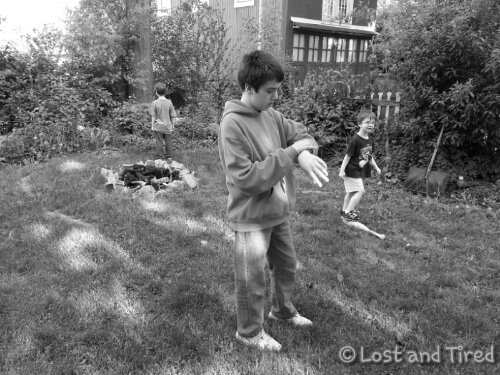 He told Lizze and I that he was expecting my Mom to show up, not us. What the hell does that mean? What was he hoping to accomplish, other than create a panic?

When Lizze and I spoke with him about this, we explained once again how he simply cannot pretend to be hurt or in pain.  That’s the type of screaming he had been doing.  It wasn’t joking, it sounded like he was in serious trouble.

I told him that if he continues to do that, no one will ever believe him if he’s really sick, hurt or in pain.

I don’t care that he’s got Aspergers, RAD or even any of the health problems he has.  There are consequences for his actions and he had everyone in a panic.

He was awarded plain Oatmeal for dinner tonight because he had already eaten lunch at my parents and dinner was next on the list.  Oatmeal is one of our goto meals when someone doesn’t want what we make.  The consequences for his screaming was that he lost the ability to choose what he wanted for dinner.

This led to a decent size tantrum.  While it was relatively mild, Emmett was hiding and he created a scene.

Not only is this bad for everyone around him but it’s also dangerous for him do to his autonomic issues.  That said, he has to be held accountable and he needs to understand that you can’t cry wolf.

I’m sure that no lesson was learned but at least we did what we felt was right and made the effort to teach him.

It’s going to be a really, really long summer.  🙁

I am also interested in this issue of punishment.  My daughter has always been extremely difficult to punish; sounds sort of like Gavin.  Given a punishment, she will thrash around (metaphorically and sometimes physically) trying to get out of it.  The punishment becomes the focus of the day rather than the behavior — and I have noticed that it allows her to shift her focus from the behavior to the punishment with the result that she doesn’t think about the behavior at all, just the punishment.  She can become, in her mind, the victim of the punishment rather than the perpetrator of the behavior.
I have had much better luck since I stopped trying to punish her.  I speak to her firmly and clearly — and for a very short duration — about the behavior.  “I know you were X, but I wish you had not done Y; it makes the whole family feel Z” kind of thing.  Then I let it drop and allow her to regain her “good” status in some way.  Ask her about something that she likes or (only if she might do it) ask her to put her coat away — something small so she can be helpful.  And then I praise her like crazy.
I used to have a belief in punishment as a way to correct behavior; I no longer do.  I’m curious about how the parents of other “difficult” kids handle this issue and what works for others….  Has anyone else come to this same conclusion?

I find your oatmeal punishment very interesting. I never thought to try something like that. My son has recently been diagnosed by the Cleveland Clinic with PDD, and since then I am at a loss for punishment. Nothing works, he laughs at me. He now has this sense about him like he know’s I’m scared to punish him. If you have any other good discipline ideas that you would like to share that would be awesome!

christiebenton7 small world.  We visit the clinic quite often.  For us, it’s all about control.  Gavin’s a control freak and as such wants to control every aspect of his life.  We find ways to take away that control and only allow him to have it when  he makes good choices.  I should qualify this with Gavin has way more going in than just Aspergers and by taking away control, I mean things like TV time, choices for meals ect.  The hard part is knowing when something is outside of their control.  Although, there needs to be accountability regardless, IMHO.
This is a good question  to pose in the support forums.  You should sign up and ask in there as well. http://Www.lostandtired.com/myautismhelp

Sounds like my oldest son right now. He does not like going to be without a story, massage and everything else on his nightly laundry list. He does not get these things if he keeps getting out of bed, older and older. So he screams for no reason, to try to get us to come running there and cave in.

I meant gets out of bed, over and over.

rmagliozzi I know what you mean.  🙁