An #Android users journey with an #iPad: Just a few things I’ve noticed

Too Many Too Soon: The Anti-Vaccine Fallacy (#Autism)

Mad props to my kids OT for instituting this new policy

An #Android users journey with an #iPad: Just a few things I’ve noticed


Alright, I wanted to update you all on my experience with using the iPad so far.

How can I sum this up in a just a few words? How about love/hate. So far I have a love/hate relationship with my new iPad.

I’m finding myself frustrated at times because of all the things that Apple borrowed from android, they left out the friggin back button. For me, being used to having this available on all my android devices, I find this cumbersome to not have that one iPad.

Something else that I don’t like is the onscreen keyboard.  To me, it’s useless and inefficient, especially when compared to even the most simple keyboards available on android.  When you compare it to something like SwiftKey, the keyboard I use on my Galaxy Note 2,  there’s a huge difference. 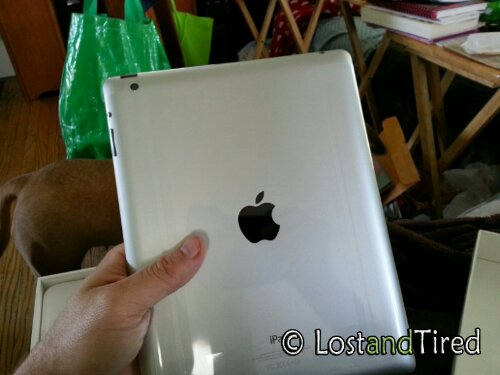 In my opinion, this is a bizarre thing for Apple to have done.  I realize that when using a physical keyboard, the letter on the keys are all uppercase but apple choose to design their on screen keyboard that way, on purpose.

I’ve also found myself having to tap things multiple times to get something to register. Moving the cursor within a field of text is not easy and I still haven’t figured out how to copy and paste (is that even possible?).

Overall, I find the forced implementation of the iPads stock apps very limiting. It all comes down to a total lack of choice.

With android, if I don’t like the stock keyboard, I just download a new one.  The same holds true for just about every other android app as well. Nothing is forced on me.

On the positive side, I still can’t say enough about the build quality.  I love just holding my iPad.  It’s extremely well built and the only thing that I could even conceivably compare it to on the android tablet side would be something like the Infinity  or the Prime, both by Asus.  That being said, both of those devices were plagued by hardware issues.

I would suspect that androids hardware fragmentation is at the root of that.

One of the things that I was going to try to do was use the iPad exclusively for a week and see how productive I could be. Unfortunately, at least for tonight, I’ve given up on that idea as I’ve already lost two rather large posts to the iPad version of the WordPress app.

I also found that using the onscreen keyboard on a 10 inch iPad is not really practical, at least for my needs. I would need to look into a keyboard dock or something to make me more effective.

So far, I just don’t get why anyone would choose a predefined tablet with no ability to mold to your individual needs as a user, over a more powerful, feature rich and fully customizable android tablet.

Cindy you are persistent and I admire your passion. 🙂

The iPad is a great device. I’m not denying that. All I’m saying is that it’s hard to adjust when coming from a device that encourages you to customize to meet your specific needs. Apple is just completely different. Somethings I can adapt to, others I cannot. 🙂

I do love the debate though. 🙂

My colleague here who is a network administrator uses his iPad all the time, but he has a case with an integrated keyboard, and he often uses an app that allows him to use the iPad as an extension of his desktop, which significantly expands the screen space he has to do various tasks.

LOL, understood. I’m not a developer, but I “get it”. I think Apple in general, though, is moving away from external storage and towards Cloud-based everything. I just don’t feel the Cloud is as dependable as something concrete in your hands that has all your files at your fingertips.

Oh I forgot. The lack of external storage is a negative for me as well.

Yes but you can’t replace the keyboard itself. As a developer it’s frustrating to be limited and locked down. The iPad is a great device for some people, but I like to use widgets, custom apps and other things that simply aren’t possible in the iPad.

Again, it’s a fantastic device but I just feel it’s limiting and would take a more powerful, well rounded, feature rich android tablet in a heartbeat.

have you looked at the sites that have info on how to customize the settings for accessibility, etc? You can change how it uses the finger swipe and other things.

Thanks Cindy Wolf. Unfortunately, most of my frustration revolves around its lack of customization. Some things I still need to figure out but most of my problems are by design.

Rob: 1. Apple has wonderful tutorials online for iPad. 2. To select/copy/cut/paste, all you do is press and hold for a second at the spot you want to do so, then the menu will come up. 3. The VR thing for Google and writing is super good on iPad, compared to other devices. Just click in the field where you are going to type, then tap the little microphone that appears with the keyboard and speak. No hands needed. There’s more, but I fear that what you’ve criticized seems to me to be more of a lack of reading the tutorials or the help menus or (yes, I realize you are male), the user’s guide. We’ve had both and we infinitely prefer the iPad.

As a developer, I have a hate/hate relationship with Apple. I agree with all your assessment regarding the device. Some of the functionality that should have been built in is not available – which is REALLY strange since there has been how many versions released??? Way too many because every time there is a new device, we have to purchase it and modify our code.
In terms of iOS vs. Android – even through in absolute numbers, there are more more Android devices in the market, the penetration in the Special Needs community, and probably anything related to educational communities, is way higher than Android.
Lastly, you are absolutely right again about the fragmentation of the devices being difficult to manage.

I have an itouch so this might or might not work the same. As for copy/pasting text, select it and without letting go HOLD it. A little menu above it pops up saying Copy. Hold a touch where you want to paste, and a menu will pop up just like that, that says paste. Hard to explain but easy to show.
As someone who used my itouch for about a year before trying an android phone or tablet, I find your keyboard issues a little amusing because I had the exact same issues switching from apple keyboard to android keyboard -even going to swiftkey. Swift key still pisses me off, excuse my language, many times when I’m using it. I like apple’s autocorrect system better. If I want to type ‘Sila’, and it tries to correct it to ‘Silly’, I just backspace it up to the ‘Sil’ and type ‘Sila’. It goes ‘Okay, you wanted Sila not Silly. Got it!’ and it remembers it for the future. Swiftkey’s autocorrect is…annoying. Even simple typos will get autocorrected to something else and I can’t just backspace individual letters, because it wants to delete the whole word instead. I like Swift key’s easy access to symbols and numbers. Just holding the letter key works nice when I’m typing fast. But other than that, I still much prefer the apple keyboard. I think it’s just a matter of getting used to it- they’re two completely different types of keyboards imo.
As for trying to move the cursor around, I just zoom in and move it wherever I want. I’ve gotten used to having such a small screen area on my ipod touch, that I can click very small links like a sign in link with about 80% accuracy when zoomed all the way out. I can imagine it being much easier on a bigger screen on an ipad.
If I ever got a tablet of that size, I wouldn’t bother with the touch screen keyboard anyway. I touch type much faster on a regular keyboard, and on something that big I’m tempted to try and use both hands and all fingers- which doesn’t work too well since the screen can’t keep up with 10 fingers moving 100 words a minute.
One app I really like is called Battery Doctor. It’s a free app that can remind you to charge your battery on certain days/times (or every day), and will play a tone/alarm at you when it’s done charging so that you don’t overcharge the battery – therefore saving some of the battery life in the future. It also will tell you what apps you can close to save a certain amount of time left on the battery before it dies.
Oh, and a tip just in case you didn’t know. When you ‘close’ an app by hitting the home button, you’re just putting it in the background. It’s still running. If you want to actually CLOSE it, double tap the home button when you’re on the home screen. The home screen will slide up and the bottom will show all your current running apps. Touch and hold your finger on an app, and it’ll start to shake and a little red x will pop up on the corner of it. Hitting the X will close the app’s process. Much much easier than Android, at least compared to the android phone and tablet I’ve used. I still fight to figure out how to close most apps on my boyfriend’s phone without just restarting the phone.

Me personally I would not own a iPad unless if I was given one for free, I would never pay cash to get one. Because I can’t unlock, root, or Mod it, like I can do with android. Also another thing is the battery is because you need a Paint Scrapper to even open it to even try to replace the battery which is glued in like crazy. I hate glued in batteries that I can’t service or change out.