Just kill me now, I can’t take any more tonight

This is sad and I hate to admit it, but it’s true

I don’t know if I’m more angry or heartbroken

Just kill me now, I can’t take any more tonight


I know the title is a bit dramatic but I at the time of writing, I was a donkey on the edge.

I wish I had positive news to share with all of you. I wish that I could say that Gavin came home and we had no problems.  Unfortunately, I can’t say that.

When Gavin got into the van after school and I went around asking each of them about their day, I cringed as I got to Gavin.

He proudly said that he had an awesome day.  I was like, thank God.

I asked him if there were any problems today and that’s where things rapidly went downhill.  I asked him how his homework from last night went.  He informed me that he never turned it in. It was that point that I felt it best to pause the conversation until such a time that I wasn’t behind the wheel of a car. 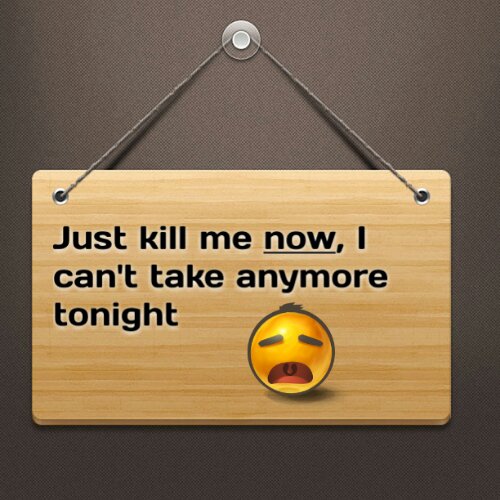 When we arrived home, we got the two E’s a snack and sent them upstairs so we could chat with Gavin and figure out what the heck just happened.

Lizze asked him if he’d turned in his homework and he told her no, he hadn’t..

Feeling the vein in my forehead throbbing, I asked him why he hadn’t turned it in.  He said it wasn’t done and he knew had two problems left.

This is where I got really frustrated because if you recall, when we went through all of this last night, he had been simply making up answers because he either didn’t know how to do the work or didn’t want to the work.  There’s no way to really know for sure which it is.

I wanted to know why he even cared about the last two problems when everything else was made up answers?  Why didn’t he friggin turn it in?

The answer I got just totally blew me away and all I wanted to do was run away screaming and waving my arms in the air.

It turns out we were talking about two different things, although I’m not sure how he got these two things confused. I really think he’s messing with us, I truly do.

He claims that he thought I was asking him about his homework for today.

I was very, very specific about referring to the homework from last night but he insists that he never heard Lizze or I say that. Whatever, it’s not worth me having a stroke over.

When I asked him of He had homework tonight, he said that he did.

However, his homework tonight isn’t really homework.  It’s in class work that he didn’t finish in time. Instead of turning it in, he told his teacher that he give it to him tomorrow, after he’d had a chance to finish it.  The openly admits to this.

This conversation led to a tantrum because he knew that he was busted again.

Lizze and I just stared at each other, unsure of what to say.  In truth, it was more like we were trying to refrain from saying something we’d later regret.

As a result of this and other reasons I haven’t shared just yet, we had to remove a few privileges until the homework situation is straightened out.  We also have reason to be concerned about contact with the boys again.  That will be a whole other post but this is just the way it is.

After being reminded about boundaries again tonight, he got too close to Elliott and so he ended up losing his choice of dinner tonight and instead had oatmeal.

He was really pissed off now, not because he did anything wrong, but because we were holding him accountable for his actions.  So began the second, more violent tantrum of the afternoon.

I’m so frustrated right now and I just don’t know what to think.

What we don’t know is if the cognitive regression plays a role in any of this or if this is Reactive Attachment behavior.

Personally, I’m seeing this as at least mostly free Reactive Attachment related because he’s been caught several times trying to pit Lizze and myself against the school. This happened as recently as last week.

I don’t know what to do.  I feel like I’m going crazy and This problem is getting bigger and bigger.

JenniferPohren I don’t think anything you said was offensive in the least.  In fact, the part about hugging my kids, it some of the best advice ever.  🙂 While I do that anyway, it’s excellent advice for anyone.  🙂

Hang in there. In the real world, academics imposes this artificial due date of when kids should have evolved into fully-functioning adults trained in time management and organization skills. Don’t worry about it. Keep trying. My neuro-typical daughter behaves this way. My autistic son does as well. It’s a battle day in and day out with keeping things together. I think I grew up learning by  osmosis. And I reached an age of maturity that I knew things had to get done and the only way it would happen was if I took the steps myself to make it happen. Just don’t forget to hug your kids before YOU go to bed! Hope I didn’t offend anyone with this post. Not my intention!

ronnieyounglopez I agree with you

Yep today is one of them

Hi Rob,
It doesn’t sound like he’s doing this on purpose.  Might it be possible that he has some kind of issues with memory gaps that affect his ability to recall sequences ?  I don’t know whether there is testing available specifically for this kind of problem but I would like to know that as well.  If his teachers are saying that he does well in class, and has in fact finished his classwork satisfactorily, it seems like he is understanding the academics, but just has gaps in his memory as to what he has already accomplished in the way of tasks.