We’ve been smacked in the face with a new problem

It does my heart good to see this

I’m so stinkin proud right now. You gotta see this.

We’ve been smacked in the face with a new problem


We’ve been smacked in the face with a new problem.  Emmett says that he can’t see with his glasses on anymore and refuses to wear them.

This is concerning for me because the doctor said that his eyes would never get better, so it stands to reason that they are getting worse. 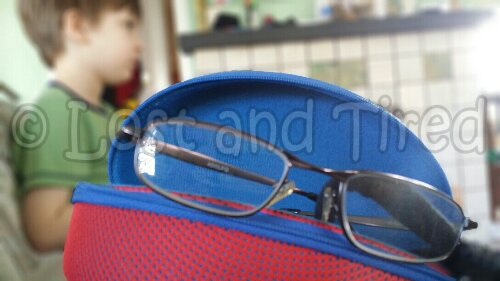 It should also be said that we have no experience with glasses.  I don’t know if this is normal,  especially after only having glasses for maybe 6 months. It’s also pretty obvious that he can’t see with them off either.  He has to stand really close to our TV to be able to see what’s going on.

We have a call in to his eye doctor and will probably have to bring him in to get checked out.

He’s refused to wear his glasses for 3 days now and we spoke with his teachers and they are keeping a close eye on him during the day.  We also send his glasses to school with him but he insists that his vision is worse while wearing them.

For the record, Emmett loves his glasses, so this most likely isn’t just him trying to get out if wearing them.  He’s actually upset that he can’t wear them fight now and that tells me that somethings wrong.

I really dislike being in unfamiliar territory on things like this.

Is he still having problems?  Were you able to get him in to get a perscription check?

Might be the frame is bent a bit, and that will throw the vision off.. Or there are scratches and or scuff marks on them, take them in to check the frame…

Yes, I agree with people here.  Check the glasses out, to make sure they are correctly adjusted (kids can easily bend their frames).  Also, check to make sure he hasn’t scratched his lenses, or scratched up any coatings (I have anti-glare coating on mine, and it can get scratched up – it does make it look very foggy if there are scratches – also, look to make sure the lenses are clean – yes, its obvious, but you should check.  and if all else checks out, get another check up to see if his prescription has changed.

i was blind as a bat at age six and every year i had to get a new perscription. i am not a doctor but it sounds like you are on the right track to get his eyes checked early as maybe even a little bit of change is affecting him. i hate that he feels worse when he wears them as you know he has to see a bunch better wearing them. i know this stresses you out and i will be praying for all yall to have peace

just FYI… LensCrafters is awesome about changing prescriptions up to 90 days. sometimes it is hard to get the RX right when there are special needs for the patients.

He may need new lenses with stronger prescription

Eyesight is such a tricky thing for us to decipher for these guys. Eyes can change fairly quickly for some kids. I know my own son once needed his prescription increased only 6 months after getting new glasses. He was on a growth spurt at the time. Perhaps the little guy is growing and that could cause changes in his eyes. Must be frustrating for him. I hope you guys can figure it out.

43 – still changing, and I don’t mean the bi-focal part of the ‘script either.
My DeeDee is hoping to hit 6 diopters out, then the insurance will pay for the polycarb lens for life (or, until the policy changes)  She is at 5.5 now so maybe…  It sounds stupid to say, but she will never be without glasses so ‘a little worse’ isn’t that much worse but makes at least $60 difference.

My oldest daughter had new glasses every six months at first, then just every year. My youngest has new glasses about every year, but probably could have them every six months if I was willing to spend the money on the lenses (she’s just 7 and the changes are not major between the shifts, but it’s enough that if her ADHD and ODD were worse, she’d probably really struggle and not want to wear her glasses until they were perfect again).
I agree with the other comments that you should have the glasses checked, as well as having his eyes checked — if the script hasn’t changed (or hasn’t changed enough to warrant new lenses), get the glasses checked to see if the lenses have slipped or if the frames need to be adjusted. But sometimes it’s something else. Sometimes it’s something someone has said that you don’t know about or something that they’re thinking about or considering. When my oldest overheard someone call her four-eyes, I almost couldn’t get her back into her glasses (and she couldn’t see to walk across a flat floor without them). It took me weeks to get to the bottom of it all (and it would have taken longer if she was one of my non-NT kiddos).
Hopefully, it will be a simple change in prescription. Hang in there. 🙂 You guys are awesome parents, doing amazing work with these boys.

It is normal for eyes to get worse, sadly.  They generally stop when you approach adulthood.  Mine got worse until I was 20.

What Jennifer said.  1000%
Glasses have an axis and if that is out of alignment with his eye(s) it is like when any other part of life is off-kilter:  CHAOS!  My eyes are so mis-shapen that just tipping the glasses less than 1/8″ leaves me unable to see.
Also, you could call the place that provided the script and ask for a perscription check.  They measure the glasses (checking things like the axis and the rest of the script) and then ask him to read their eye charts with them on.  They can do that and adjust them in one visit.

Rob you may want to check and see if they are even. You can do that by laying them on a flat surface with the tops of the frames on the surface. If the ear pieces are both resting on the surface they are even. If he has an astigmatism there is a special curve to his lenses. If one of the lenses has rocked in the frame that could be the problem even if he doesn’t have an astigmatism. Take his glasses in to have them checked and make sure they are sitting on his face right maybe the ear pieces are too loose and they are slipping so the center of his eyes aren’t lining up with the center of the lenses. I have been wearing glasses full time for almost 20 years and they can be a pain. Even walmart should be able to straighten them and tell if one of the lenses rocked in the frame.