WORST MORNING EVER – Emmett refused to go to school

HUMANIZING #AUTISM – Working to show the human side of #Autism

DO THEY REALLY WANT TO KNOW THE TRUTH – What do you say when someone asks “How are you doing?”

WORST MORNING EVER – Emmett refused to go to school

We knew that he wasn’t sick because he was fine until it was time to get ready for school.

After about 30 minutes of kicking and screaming, we realized what was going on.  I blame sleep deprivation on Lizze and I not picking up on this sooner.

Emmett was upset because one of his teachers left for a different school last Friday. This also explained yesterday’s resistance as well. 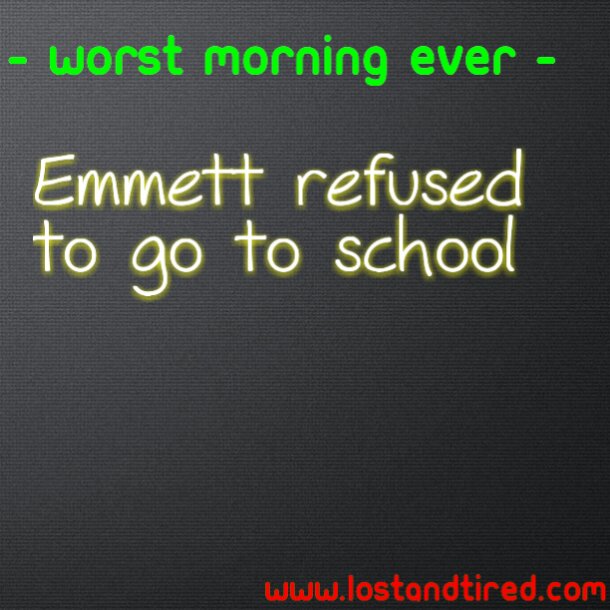 The poor kid was stressed out because everything at school was different now.  We only realized this because when we asked him about her, he got even more upset.

We tried to reassure him and with a little bribery, eventually got him dressed and out the door.  I told him that if his tummy ache continued, that the school would call me and I would come get him.

He and I walked down to breakfast and his teacher saw me and shouted “Where’s my Emmett John?”

Emmett peeked around the corner, she came over to him and wanted to know what was going on (she already knew because Lizze had already called her). She has an amazing g relationship with Emmett and she knows how to motivate him.

She asked Emmett if he would Please stay and be her special helper today because with Mrs. Ferguson gone she didn’t have a helper anymore.

His little eyes lit up because he loves to be a helper.  I promised him that if he needed me, I would be there for him.  He went and grabbed breakfast with his brothers and that was it. I love his teacher and I love this school.

It took over an hour to get him to calm down enough to be okay with returning to school.  I imagine that we will likely see more of this as he adjusts to the changes…..

This was a truly awful morning and Emmett being this upset just breaks my heart.  What makes this so hard is that he can’t just say “I’m upset because my teacher is gone”. Emmett’s verbal and he can’t express that. My heart truly goes out to those who can’t talk and their families.

As I’m writing this, I’m sitting in my parents car, waiting to pick up the boys.  I’m praying that Emmett had a good day because I honestly don’t know if I can take another morning like this.

Having a similar problem here today!!

I understand, completely. B had issues today & couldn’t explain what the problem was. Very frustrating.

We almost had that.. full on tantrum as soon as we pulled into the school.. 🙁

I know the feeling

Elyse Salpeter Thanks.  I really hope he did as well.  Now that we know what’s going on, hopefully it will be easier to help him through.  🙂

Oh, I hope he had a good day. What’s amazing is you figured out what the problem was – that shows how much you care. Wishing him well.