I must have been evil in a previous life or something


The other day, Emmett had a massive, massive meltdown.  It happened to be over something in Minecraft that he perceived as a failure.

He hadn’t done anything wrong and the game didn’t either.  For some reason, he had just had enough and he exploded. 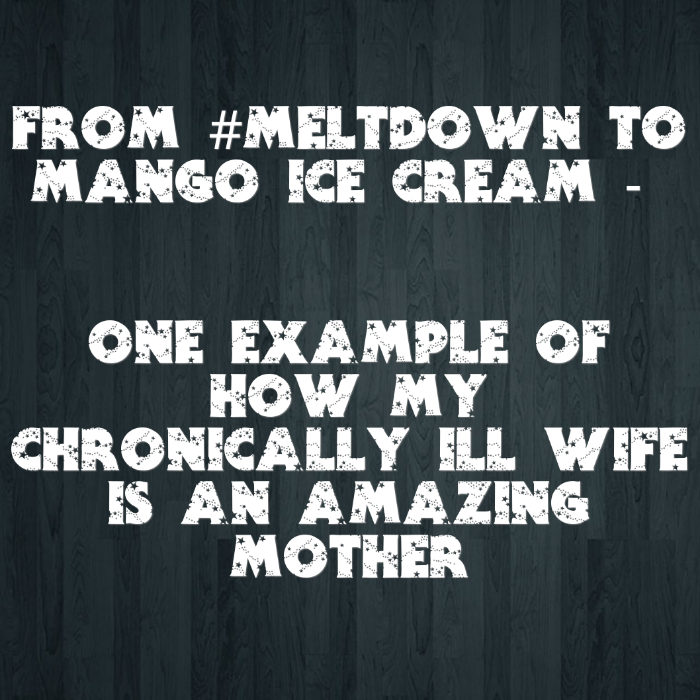 This went on for maybe 45 minutes and he was inconsolable the entire time.  It was so heartbreaking to see him going through this because he just purged and purged, without any sign of relief.

Lizze wasn’t feeling well that afternoon.  Her migraine had her nauseated and almost in tears.  She was going on sleep again and she had a really emotional last couple of days.

I thought that as a last ditch effort, I would grab the little container of Mango ice cream from the freezer.

Lizze say with him on the couch as he screamed and screamed.  She began eating little bites of the ice cream and as time went on, Emmett became interested in what she was doing.

She offered to share with him and before I knew it, they had turned eating the ice cream into a game.  Emmett’s screams turned to laughter as he ate ice cream with his Mommy.

This happens to be where the video picks up.

Lizze is such an amazing Mother.  I wish I had been recording this earlier because the transition from meltdown to deep belly laughs was just awesome to experience.

I know that Lizze is chronically ill and a great deal falls on my shoulders.  However, anyone that thinks she doesn’t make a positive impact on the kids is sorely mistaken.  🙂

food rewards always work, not good…she sure looks like she has a chronic headache!!!!

This is a darling video. I smiled the whole time. Its so nice when the meltdown finally ends…this is another topic. Ideas for controlling meltdowns!