The Formula: How We Need To Be A Great Carer For Our Dependents

3 Ways You Can Integrate Technology Into Your Children’s Education


There are a few things I need to update you all on. Some are bigger deals than others but all remain important. They aren’t in any particular order of importance. It’s just the order they popped out of my head. ☺

Gavin’s spending the night and most of the day tomorrow with his grandparents. They will be celebrating his birthday with him and taking him shopping. Gavin was really excited and I’m happy to see him that way.

An odd thing happened this morning. If I hadn’t seen it myself, I wouldn’t believe it. Emmett decided to wear socks to school today. This kid hasn’t worn socks for the better part of two years now. I’ve no idea what brought this on and whether or not it was a one time thing. Either way, it was a little miracle I was lucky enough to witness.
After school, Elliott, Emmett and I went over to may parents house. They’ve been in Florida and because no ones been home, there was about a foot of snow in their driveway. They are getting in close to midnight tonight and we wanted to make sure they could get up the driveway and into the house. I didnt want my Dad trying to shovel the snow at midnight. Trying to shovel that much snow with two kids on the Autism Spectrum and living with ADHD, was about as fun as it sounds. lol
We’ve had Ruby for a couple of weeks now and she’s an absolutely perfect fit for our family. She gets along with all the other animals, the only exception being the cat. Ruby keeps trying but Blue just isn’t having it. ☺

Unfortunately, it seems like life is catching up to Maggie, our English Staffy. She’s roughly eleven or twelve years old. She’s losing her sight, hearing and sense of smell. Sadly, it’s starting to look like she might be going senile as well. She’s not all there anymore and it’s hard to see her that way. We’ve had her for almost a decade and she’s been the best dog in the world. We’re going to get her into the vet for a check up and to see if there’s anything we can do to help her. She’s still a sweetheart but she barks when there’s nothing going on and seems to just sorta stare off into space. She’s got tumors on her legs and the vet doesn’t want to remove them right now. This was going in before be got Ruby. It’s been an ongoing process for a little while now. 🙁
This is a little late but I received another blogging award. I’m totally honored and find myself in great company… ☺

We just published our 4th annual 100+ Best Blogs and Website for Speech and Language Pathology. This year we reviewed over 330 sites to get to the best 100. We cut 11 and added 9. I am happy to announce that your site made the list. 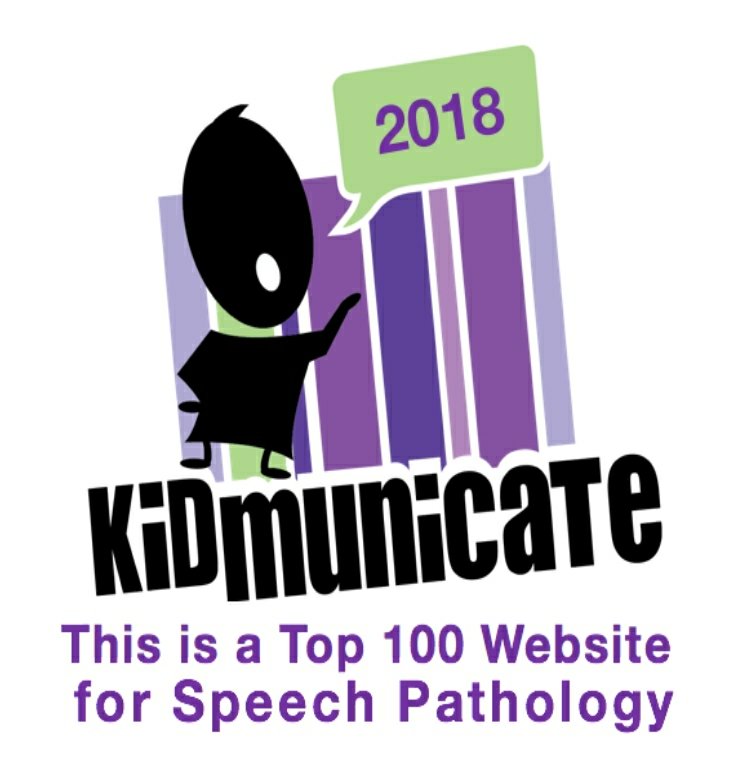 Lastly, I heard back from the Cleveland Clinic about Gavin’s NeuroPsych testing. Apparently they are booked solid through May of this year and won’t be scheduling anything new until close to May. They are going to call back around that time and get Gavin scheduled. It’s sucks having to wait but truthfully, we have our hands full with this whole guardianship thing.