I broke down and bought a new carpet scrubber

This is what #Schizophrenia looks like to my family

I broke down and bought a new carpet scrubber


My claim to fame for today has been scrubbing the carpet. That’s my major contribution to society, at least the members of society that use our upstairs, carpeted bathroom. 🙂

There are many things I hate about our house. I hate the squirrels that keep breaking into our attic. I hate that there are so few power outlets in the bedrooms. I hate that there are no shutoffs for most of the waterlines throughout the house. I even hate that it’s so hard to fix things because the house is so old and hasn’t been repaired properly in the past, making it incredibly expensive, as well as challenging to make repairs today. 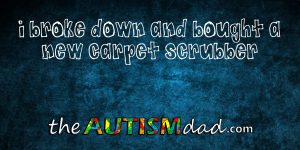 Having said all that, one of the biggest gripes I have about this house is that there is carpet in the bathroom. I mean, who does that?

We have three boys and not one among them would be considered a sharpshooter.  It’s always been an enormous pain in the ass trying to keep the carpet clean and it’s a battle that for the most part, I’ve lost. For the last few years, I was scrubbing the carpet by hand when it was necessary and that gets old after a while.

Today, however, I finally broke down and bought a new carpet scrubber. I’ve been sitting on a decent sized Best Buy gift card for a little while now. Incidentally, that’s how I know I’m managing my depression well enough. If I were struggling with depression right now, I would have spent the crap out of that gift card already. lol

I talked to Lizze about it this afternoon and decided that a new carpet scrubber would be a worthwhile investment. Before picking up Emmett from school, I swung through Best Buy and picked one up. This is the one I bought:

Setup was really easy and they pretty much all work the same, so the learning curve was minimal. I think I bought the wrong cleaning solution though but I made do with it anyway. I spent about an hour and a half scrubbing the bathroom carpet. It’d been a while since it’s been scrubbed. Between that and learning how to use the new scrubber, it took some time.

Wouldn’t it be easier to just rip out the carpet in the bathroom? Great question, to which I would answer yes and no.

This is a really old house and by really old, I mean well over 100 years old. Ripping out the carpet would also expose the wood floor which is guaranteed to be water damaged from the bathtub. I have no idea what I would be looking at and I could easily end up getting in way over my head. Frankly, I can’t afford to truly address the problem the right way.

For right now, being able to scrub the carpet every couple of weeks or so, maybe more often, will definitely be a step in a better direction then we’ve been traveling in thus far. This isn’t without its own set of frustrations though.

The floor in the bathroom is very uneven. There are several low spots that present problems. Basically, the carpet scrubber can’t hit the areas that sorta dip below the surface and it requires me to scrub it by hand. That’s tons of fun.

Anyway, it did a pretty good job on our bathroom carpet. I think if I had the right cleaning solution, it would have given better results. I have no clue how old the carpet is but it’s at least 20 years old. I know it was here prior to the previous occupants and they were here for close to a decade if I remember correctly. We’ve been here since 2003, so it’s pretty old.

I feel somewhat accomplished tonight and while I still have three bedrooms, a hallway and a set of steps that need scrubbed, at least the bathroom’s looking better.. 🙂

Most bathrooms have those silly curved rugs that go in front of the toilet. Is it possible to find a waterproof one to put in your bathrooms to keep badly aimed pee from ruining the carpet?