So much for sleeping tonight :(


I’m gonna cut to the chase…  We have a shitload therapy today and life is going to be going about a thousand miles an hour.

Lizze has an appointment in the morning and I may take the boys to hunt Pokémon while she’s there.  It all depends on how their doing at that point.  I think the boys would really enjoy going around and finding Pokémon via Pokémon Go.

There will be a small reprieve after Lizze’s appointment before we move on to Akron Children’s Hospital.

Gavin has Speech for sure and Emmett might have OT.  There’s some confusion about the schedule because some people think that the Social Group he’s in now is taking the place of OT for the next 6 weeks and yet others are saying that it doesn’t.

Last week when we showed up to the scheduled appointments, they had both been cancled without telling us.

I don’t know why Speech was cancled but Emmett’s OT had her baby and that’s pretty solid reason.  Anyway, they switched the schedule around now and so at least Gavin will have Speech today and than every other Tuesday.  They flip flopped the on and off weeks for some reason.

By the time we get done at Akron Children’s Hospital, we will have to head to family therapy.

After that, Lizze’s parents are picking up the boys because Lizze and I are going to be having dinner with my parents for the first time since she moved back home.  It’s basically a get reacquainted dinner and it’ll be time to just talk.  It’s all positive and they are very supportive..

By the time were done, it’s going to be hellava long and exhausting day.  The kids are going to be at their limits and so bedtime should be (insert sarcasm here) lots of fun. By lots of fun, of course I mean not fun at all. 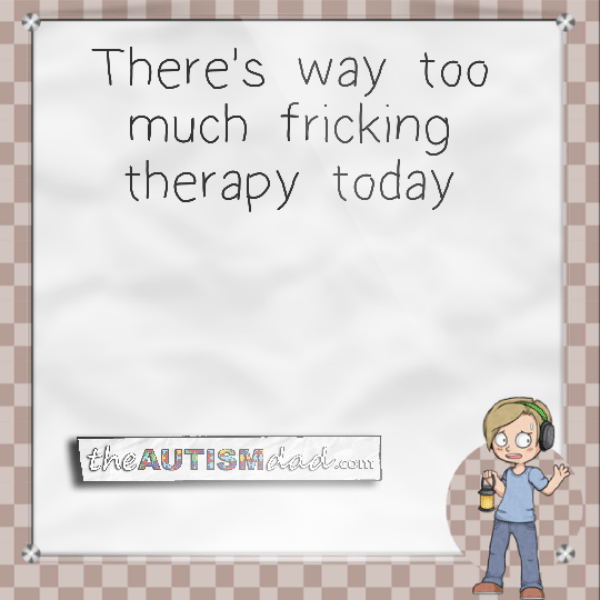