My brain is fried and my heart is broken -

My brain is fried and my heart is broken


If there are any grammar errors, I’ll fix them in the morning.  I can’t keep my eyes open and I’m going to bed.

I’m going to try and sum up everything as best I can.  If this doesn’t make sense to anyone, please know my brain is fried and my heart is broken. I’m doing the best I can at this point.

Let me begin by saying that this was one of the most difficult appointments we’ve had in a very long time.  I’m really exhausted after today but I’ll do my best to have this make sense.

I also spoke to both sets of grandparents prior to writing this because I wanted to bring them up to speed before they read about it here. 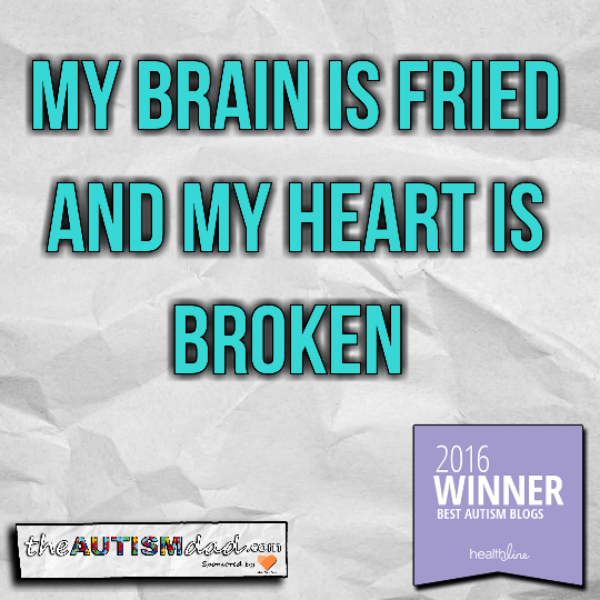 With that said, here’s what we’re facing.
We only had to wait about 30 minutes to be seen and our appointment lasted the better part of an hour.

Gavin started things out by bringing Dr. Reynolds up to speed on his latest missions. This was important because it allowed Dr. Reynolds to see first hand what Gavin’s experiencing and helped to give him a better understanding of what we’re dealing with.

Gavin told Dr. Reynolds everything he wanted to tell him, before it was his turn to answer some questions about the way his world works and things like that.

We then sent Gavin back out to the waiting room while the grownups had a very unpleasant and brutally honest conversation. Talking about this stuff in front of Gavin isn’t something Lizze and I are comfortable with.

Here’s the long and short of it.

Gavin’s worse now than he’s ever been before and just to get this out of the way, it has nothing to do with Lizze moving home. This is the progressive nature of what Gavin has going on.  It’s no one’s fault and this would have happened regardless.

It’s very important to remember that correlation does not always equal causation.

We were taken aback by Dr. Reynolds saying that this is much worse than when he was younger because Gavin was unmanageable back then. He was completely delusional and experiencing very dark hallucinations. Behaviorally, he wasn’t safe to have in the house and spent time in the psych unit of Akron Children’s Hospital close to a dozen times in less than three years.

Those behavioral issues are long since gone but unfortunately, the degree to which his delusions have become  fixed and how much more consuming his hallucinations have gotten, simply isn’t good.

In fact, Dr. Reynolds told us that this was bad and not simply just a psychotic break. Being the glutton for punishment that I am, I asked what exactly bad meant. Lizze wanted to know on a scale of one to ten, how bad are things.

The unfortunate truth is that the seriousness of Gavin’s current condition is just about as bad as Dr. Reynolds has ever seen. He explained that it was at least a 9/10. To put that into perspective, he further explained that at Gavin’s worst moments when he was younger, he was maybe a 6 or 7/10.

We have the kind of relationship with Dr. Reynolds that allows us to have very, very honest conversations.  He will tell us exactly what he thinks and we’ve grown to appreciate that.

Knowing how bad this is, it was time to try and figure out what’s our next move.

The obvious first step is to adjust his Clozapine. He will be increased by 100mg this week and by a total of 200mg next week.  This takes his dosage back up to 800mg, which is completely insane but also absolutely necessary.

We have no idea if it will work or how this will be impacting the side effects he’s already experiencing.

This is like a suicide or self-harm kinda thing.  We’re talking about delusions of grandeur that are so extreme that he may start thinking that the things he does in his works, might be possible in the real world.

As an example, he’s a super hero/god in his world. He can fly, wage massive battles and take serious risks. If the lines continue to blur, the concern is that he may think he can do all these things when he’s outside of his world. We can’t have him believing he can fly, jumping from something and ending up seriously hurting himself.  We can’t have him believing he’s super fast and running into the street.

These are all very real possibilities and aren’t as farfetched as they sound.

After the Clozapine bump, there is literally nothing left for us to try.  The only thing we haven’t tried are first generation antipsychotics but there are a number of concerns that would prevent that from being a possibility.

Any antipsychotic, aside from Clozapine is very likely to make Gavin’s movement disorder significantly worse.  Gavin can never go back on any of the antipsychotics he’s previously been on and he’s been in them all.  You may remember, many years ago when Gavin was admitted to the Cleveland Clinic for medication induced delirium.

That was triggered by his body reacting to antipsychotics.  His body is now primed to react to this entire family of drugs, should he take them again. Clozapine is different and that’s why it’s so scary that we’ve reached this point.

Here’s the real kick in the nuts. We have reached the end of Dr. Reynolds knowledge and ability to help Gavin because he’s just never had anyone that went this far out of the realm of the known and into the no one’s seen anything like this before place.

That’s really scary because it’s a pretty fair bet that if he hasn’t seen this and doesn’t know what to do beyond this point, it’s very unlikely that anyone else has either. Dr. Reynolds is the best of the best in this area. His office may run like shit but he’s brilliant, experienced and has credentials out the wazoo.

Having said that, there is apparently a program at Akron General Hospital (now the Cleveland Clinic) called FIRST. It’s something to do with people experiencing psychosis for the first time. It’s a program that pulls from a national protocol and helps people who are experiencing psychosis. They get assigned a case manager and treatment plans etc..

The problem is that we don’t know if Gavin in will qualify because of his age and that he’s been psychotic more times than I can remember. This is a program for adults and we don’t know if they will accept Gavin.

Dr. Reynolds is looking at this as a second opinion of sorts.  He just wants to make sure that they are seeing the same things he’s seeing because this is just so unheard of.

Gavin’s diagnoses have been confirmed many times over by both the Cleveland Clinic and Akron Children’s Hospital, so there’s no doubt about what’s going on. It’s just that this program offers more than what any private practice is able to.

We aren’t sure if they will take over Gavin’s psychiatric care or if Dr. Reynolds will still be driving the bus. Typically, they take over care but in Gavin’s case, that might not be possible because of the nature of his issues and the over decade of experience Dr. Reynolds has with him.

They’re going to find out about this program and get back to me ASAP.

Lastly, we are getting referred to Cincinnati Children’s Hospital because they are apparently the best psychiatric unit in the entire State of Ohio.

Aside from the eight plus hour round trip drive, I’m not sure what this will entail however, we will know more after Dr. Reynolds gets everything setup and we know for sure that they will even see him.

There are a few things that we are going to have to do as a result of all of this.

For the life of me, I can’t remember the rest. I’m exhausted and this will have to do for now.

I’m at a complete loss. I don’t even know how to process all of this. Frankly, I’m numb right now and that’s only going to last for do long before it all comes crashing down around me.  Lizze isn’t faring much better but is distracted by how much pain she’s in right now as a result of the damn weather.

To illustrate just how bad I’m coping with this, I bought beer tonight for the first time in close to a decade.  I don’t drink and the last time I remember buying beer was in college and that was in 2000. We never have alcohol in the house but tonight, it just felt like the right thing to do.  It felt normal and I wanted to just chill out tonight, have a beer and maybe be able to relax a little.

I never ended up touching any of them tonight…but instead I found a healthier outlet in the writing of this post.