Gavin's side effects are getting worse -

Gavin’s side effects are getting worse


After four days of being on his increased dose of Clozapine, it’s pretty clear that his side effects are getting worse. The side effects in question revolve around the bladder control issues, extreme dry mouth and weird mouth movements (that could just be the result of dry mouth).

Gavin and I had to get our blood work done this morning after dropping Elliott off at school. Emmett stayed home but that’s another post.

On the way home from bloodwork, we got an appointment for Emmett with the pediatrician. We got home, picked up Emmett and Lizze before heading right back to where we had our bloodwork done. 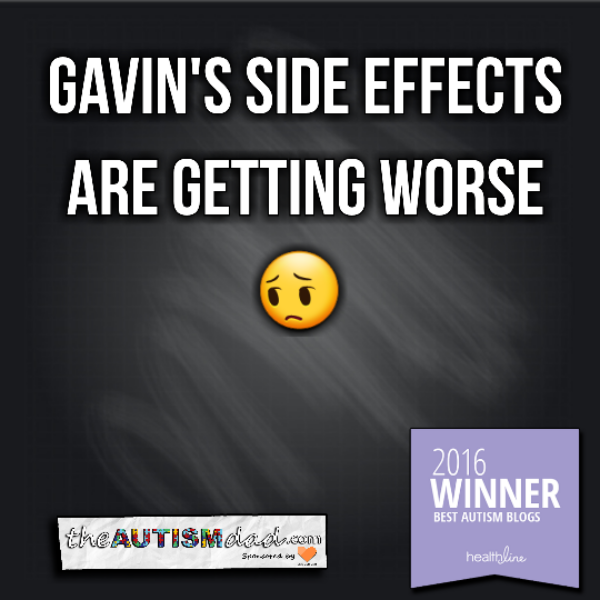 In the afternoon, Gavin and I picked up Elliott from school before parking the car for the day.
My point is, we made seven or eight trips back and forth today and in that time, it became pretty evident that Gavin’s bladder issues are worse now than they were on Monday.

In fact, Gavin told me today that for some reason, the bladder issues are getting worse. I can’t help but agree with him because the entire time he’s in the car, he doing the potty dance in the seat next to me.

I’ve also notice that he’s smacking his lips like a cow. That was part of his movement disorder when it was in full swing but had subsided in recent years.  It’s definitely back and as much of an asshole as this makes me sound like, it drives me absolutely crazy.

Gavin’s not to blame for this but I’m one of those people who can’t handle the sound of people chewing or smacking their lips like a bovine. I forget what it’s called but a bunch of my readers have said the same thing and there’s actually a name for not being able to tolerate those particular sounds.

I’m not super bad but it definitely gets under my skin, especially while I’m driving and he’s less than three feet away from my face.

Anyway, that has re-emerged in the last few days and has done so with a vengeance. The odd thing is that Gavin’s completely unaware that he’s doing this and that means at least he’s not bothered by it. I can only imagine how frustrating it would be to have no control over certain body movements.

It’s truly heartbreaking to see him going through this. It’s inspiring at the same time because he never quits and he never complains.

His optimistic, good natured and courageous approach to life has me feeling incredibly guilty for being annoyed by some of these things but I have to remember that I’m only human.

Another weird thing that’s been happening is that he will ask the same question twice, as though it was only asked once. Does that make sense?

For example, he wanted to show me his new game.

Anyway, there’s nothing we can do at this point. He’s already on medications to treat the movement disorder and the only treatment for the bladder issues is suphedrine. That’s really weird but it’s true.

Unfortunately, the constant usage of suphedrine has its own set of problems and we are no longer able to use it as a result.

Aside from all the above, he’s continuing to spend more and more time with is super best friends.  He’s doing some really weird shit while in these worlds. Today, he announced that he had designed a special glue that would repair Twilight Princess’s broken spine.  He’s particularly proud of that..

At this point, I’m both mentally and physically exhausted. I wish I had the words to express just how much this all impacts me as a parent but sadly, the words elude me.

Tomorrow is another day and I’m hoping for one that’s just a smidgen more manageable.