My son is very manic and I'm very human -

I try to remember that it could always be worse

My son is very manic and I’m very human


Please understand going into this entry that I love my son very much. He’s very, very challenging and I’m very, very human.

Yesterday, I briefly touched on how Gavin was holding up. It’s actually kinda funny because I’ve spoken with a few family members and I was sorta venting about how Gavin is talking nonstop. The response I got was akin to OMG, I wasn’t going to say anything but he never stops talking.
It’s totally true. When Gavin is manic, he will follow me around the house talking about random, often nonsensical things.

I’m not gonna lie, it gets to the point where hearing his voice just stresses me out. Yes, I feel terrible saying that but it’s the truth.

Yesterday was particularly challenging for me because I just didn’t have the patience necessary to cope with a manic Gavin constantly talking. The only reprieve is when he goes on a mission or if he’s watching a movie in his room. 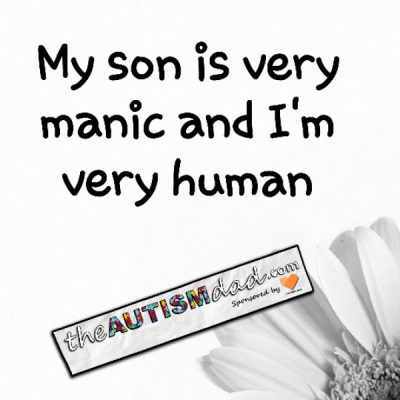 The talking wouldn’t even be so bad if it wasn’t so totally random. It wouldn’t be so bad if he didn’t assume that we were privy to the conversation he was having in his head before asking us something that would only make sense if we’d been privy to that conversation.
It’s a great deal of trying to manage his talking so that he doesn’t drive everyone around him crazy.

He’s not doing this to drive anyone crazy. It’s just part of him being manic and something we have to deal with when his pendulum swings in that direction.

The truth is that the hardest, most exhausting part is simply trying to be patient and understanding because it isn’t his fault.  There are times I just want to scream, shut the fuck up because I can’t take anymore.

I’d never say that to him of course, but it’s not uncommon for me to have to very directly tell him to stop talking.

He’s such a good kid and this is just part of the Gavin package sometimes.  ☺