Don't count your blessings before they put their pants on -

We’re giving serious thought to homeschooling at least 1 of our 2 kids with #Autism, that are still in school

Don’t count your blessings before they put their pants on


I’m going to keep this short because I’m already spent and it’s not even lunchtime. Unfortunately, this morning didn’t quite go as planned when it came to Emmett and his brand new pants. In fact, it went the opposite of who I was hoping it would go.

Emmett woke up really early and that doesn’t usually bode well for his limited ability to cope with the world around him.

I ended on the couch last night because my allergies were really bad and I couldn’t stop sneezing. Rather than keep Lizze awake, I moved downstairs.

I woke up to Emmett not being dressed for school and already in distress over the fact that he was going to have to wear his new pants. They fit great while at the store but he was worried they would not feel the same today and he was right.

The pants didn’t come up high enough and they weren’t tight enough either. Emmett likes them so tight around the waist that it would give most people stomach cramps. The reality is that the new pants fit him perfectly but they don’t feel the second as his old ones. This panic led to anxiety and that very quickly led to a massive meltdown. 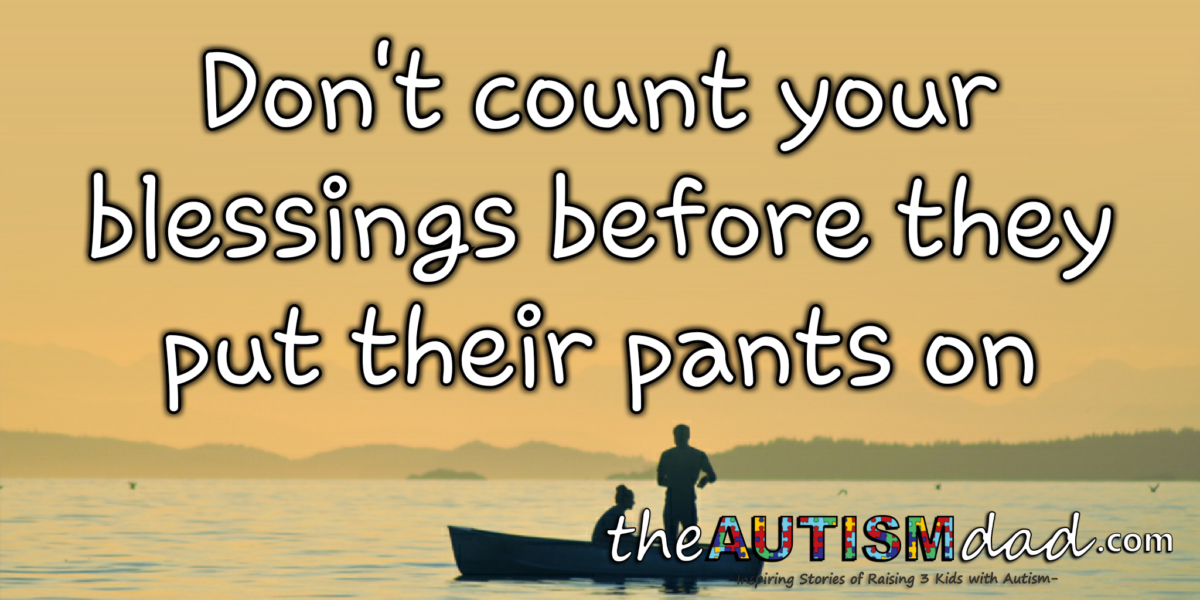 Before anything could go to far, I said fuck it, he can wear the pants the hole in the knee. I actually said that to myself but out loud told him to put on his old pants.

He feels so much guilt because he thinks he’s wasted our money. We told him it wasn’t a waste at all and that we weren’t mad at him in the slightest. That took some convincing but he did eventually accept my answer.

I told him I was really proud of him because while the pants didn’t work out today, he was still wearing a new school shirt. I really played that up so he could give himself credit for having overcome an obstacle.

Unfortunately, once we worked though that, he began to panic because he was afraid he wouldn’t have time to do his in class work that he missed yesterday.

It was so bad that he was getting sick to his stomach. The only thing I thought might work is if I called and spoke with his teacher. She ended up talking directly to Emmett on the phone and calmed him down. God bless her because I was in far over my head. The DC hook was a huge help over again.

The long and short of it is the boys both made it to school on time. They were both in good mood as well.

Never, never, never take for granted that your kids wear clothes. You may not like the clothes they pick but at least they’re wearing something…..

Do you have a place in the area that can hem the pants higher? And can he do belts, is there a way you can convince him a belt gives him control of how his pants feel?

All good suggestions. To be clear, he wants the waist right above the belly button. The pants legs have to tough the top of his shoes. He will actually use a belt because it the problem is that most pants can only be pulled up so high because of the crotch.

Thanks for the ideas though. I can hem the pant legs but I couldn’t add an inch or two to the height of the waistband…