If lawmakers won't make the changes, it's time to change the lawmakers #GunReformNow -

So far so good-ish

We had a massive, massive meltdown

If lawmakers won’t make the changes, it’s time to change the lawmakers #GunReformNow


I’m sitting in the car, waiting for the boys to come out the door after dismissal. I can’t help but feel heartbroken for all the parents who can no longer do that because someone entered a school building and murdered their innocent child. I can’t even image what these families are going through. I can’t image what the survivors of these school shootings are trying to cope with.

We have an epidemic of gun violence in this country and it’s absolutely inexcusable. 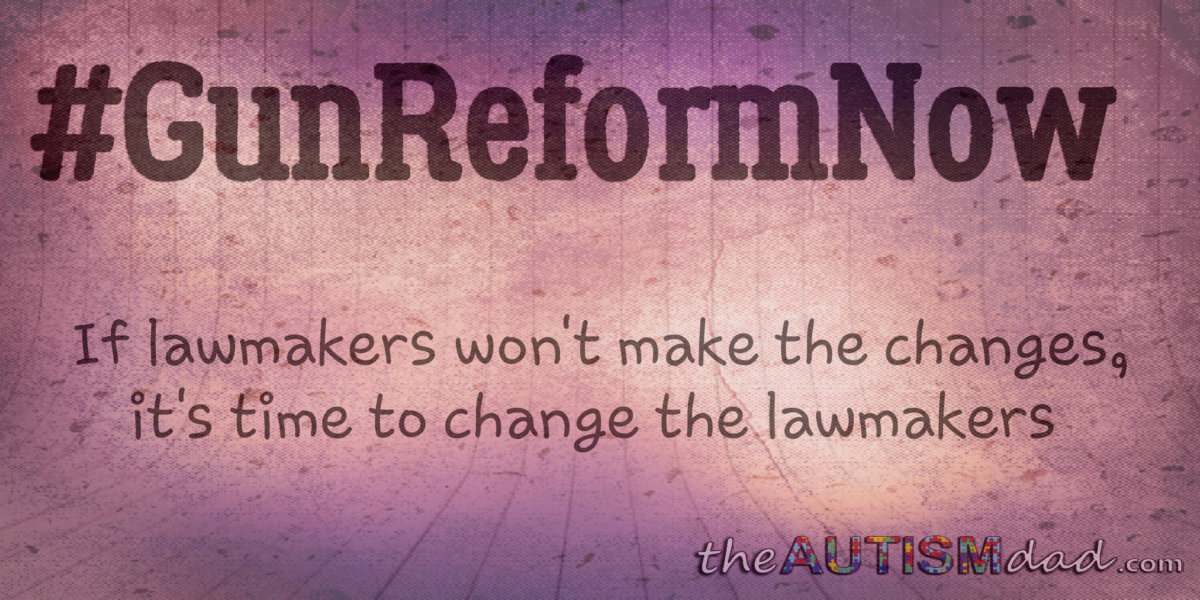 We need commonsense gun laws and we need them now. More than 400 people have been shot in over 200 school shootings, since the Sandy Hook Elementary School tragedy in 2012. According to the New York Times, 438 people have been injured and 138 have died in the above mentioned shootings.

Something needs to change. Are we really okay with living in a country where our lawmakers refuse to do anything about this because they’re afraid of losing their jobs or their NRA funding?

We need better background checks. We need a ban on any device that can turn a semiautomatic gun into a fully automatic. We need to seriously reevaluate what guns should be legal outside of law enforcement and the military. We need lawmakers that aren’t in the pockets of the NRA. These are commonsense changes that most people seem to agree on.

The courageous student survivors of the recent mass shooting at Marjory Stoneman Douglas High School in Parkland, Florida are leading a movement for change. They lost seventeen lives when a previous student entered the building, pulled the fire alarm and opened fire, using an AR 15 assault rifle that he legally purchased.

In what Universe does it make sense to allow people to legally purchase an assault rifle before they can legally buy beer? We don’t trust eighteen year old’s to drink responsibly, but we trust them to own an assault rifle designed to kill?

We have strength in our unified voice and our most powerful weapon is our vote. If our lawmakers won’t make the changes, it’s time to change the lawmakers.

A good place to start — look at the actions Australia took after a SINGLE mass shooting. Look at countries (like Japan) that have strict gun control, and yet… the people are happy. This is what gets in the way every time… “it’s too hard”. No, really it ISN’T!!

There’s a great deal of paranoia surrounding gun control. Like they need their guns to fight off the government. I don’t know that we have use for a well armed militia anymore. The 2nd amendment might need brought into the 21st century

fight off the government?? really?? (and yes, I’ve heard that one… frequently)… trust me… if we get to the point where they have to fight off the government an arsenal of AR-15 isn’t going to be enough.
We HAVE a well-armed militia — it’s called the National Guard — and it’s well-regulated, as required by the Second Amendment.

1) Define ‘gun-reform’. What does it mean to you?
2) How do you propose that lawmakers make this happen?
3) What are you doing to affect change?

I’m not disagreeing with the spirit of what you are saying, but I think that gun reform and gun control are much more difficult and much more complex than the average person thinks. Putting the genie back in the bottle isn’t as easy as outlawing guns.