You’ve reconciled and put your family back together. Now what?

The house was silent aside from the screaming and yelling……….

The ferrets are so sweet, especially when they’re sleeping…

You’ve reconciled and put your family back together. Now what?


After almost 2 years of separation, my wife (Lizze) moved back home and we have finally reunified our family.

It’s been a long, painful journey but it was worth it because we made it through and are stronger for it.  I wish it hadn’t had to happen this way but I think it had to.

Putting our lives back together is no easy task and should be a considered a work in progress. That’s not a bad thing either because after all, life is a work in progress. There’s some complexity to merging our lives back together after so long but having been married for 11 years prior to the separation, there’s a great deal of positive that we can pull from as we build a new future together. 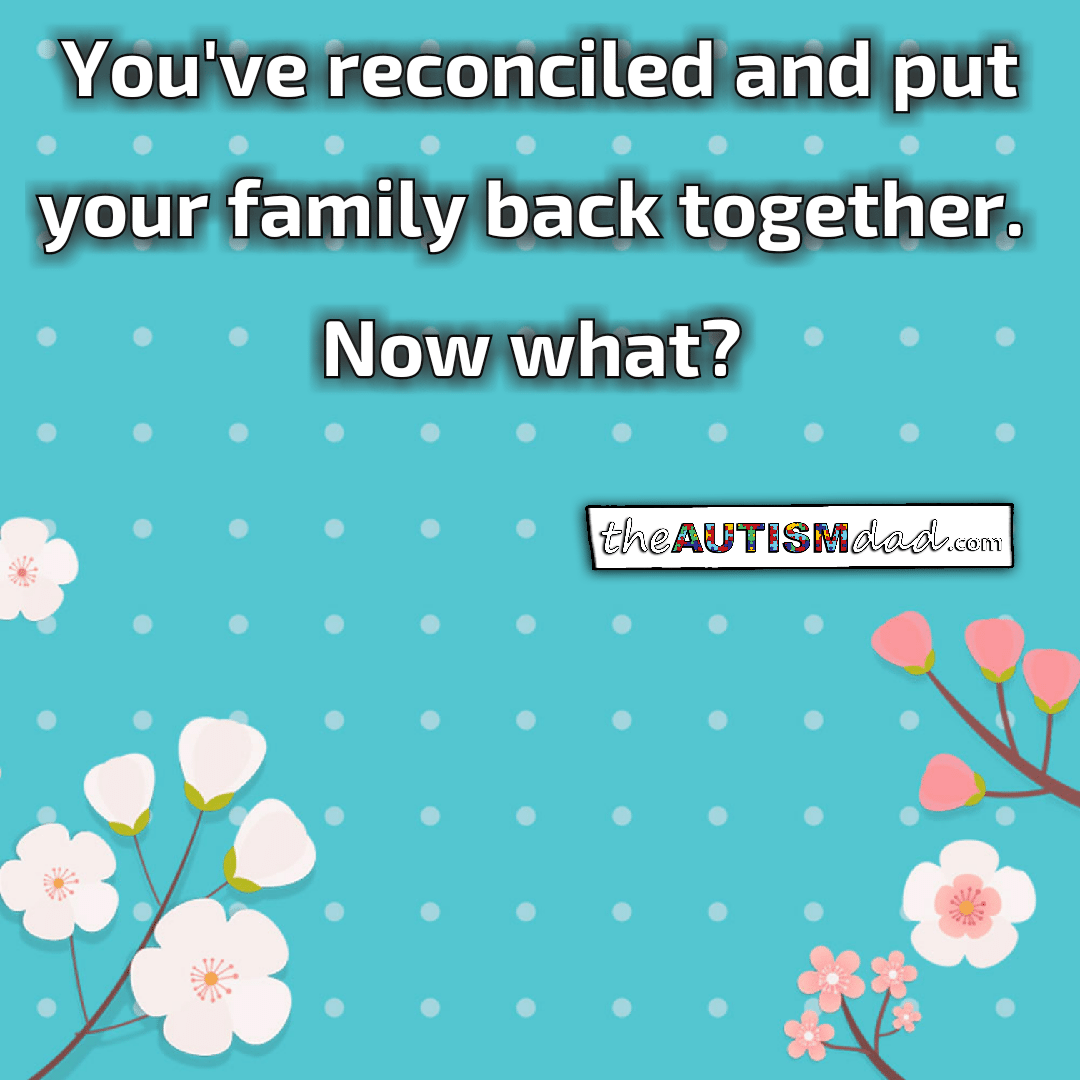 That being said, I wanted to address something that I know can be a problem for many couples out there trying to put their families back together, after some time apart.

While two people can chose to save their relationship and see it only as a positive thing, the people in their lives may not.  These people would include family and friends of both people that make up the couple in question.

More often than not, friends and family only mean well but can very easily have a misguided approach.

I wanted to share a few thoughts with the families and friends of any couples that may be reuniting after having been separated.

When a separation occurs, it’s a very difficult on everyone, especially if children are involved.  It’s the kind of thing that can be very hard for extended family and friends to sorta get over because they are likely on one side or the other of the imaginary line that is drawn when couples separate.

When reunification occurs and families are put back together, even in a better, more healthy way, it’s often tough for those extended family members and friends to forgive and forget.

I don’t believe in mincing words or stroking people’s egos. I prefer to be upfront and honest because that way there’s less chance of being misinterpreted.  I mean the following words in the most respectful way but at the same time, I want to be very clear and make a point.

If I could speak directly to those people,  I would offer a few words:

At the same time, you have to remember that while you may have been hurt too, it’s not your life/marriage and assuming the reunification is a healthy one, your role is not to judge or throw up road blocks.  As a friend or family member to one of those involved, your role should be one of love and support, especially if there are children involved.

It’s important that this newly put back together family, feels like they have your love and support.

It’s of equal importance that the newly put back together family is patient as well because this is a change for all involved and sometimes it just takes time for people to adjust.

Having said that, the reality is that the couple doesn’t need your permission or approval to reunite their family but I’m pretty sure they would definitely benefit from your understanding and acceptance of the enormous decision that was very likely not made in haste.

As family and friends, you play an important role in the healing process. I would encourage you to let go of any anger or resentful feelings because they serve no purpose.

Any resistance, friction or anger will only serve to hurt all those involved, especially the children who will not doubt pickup on it.

Please remember that no one is expected to just pretend like nothing happened because it did happen.  At the same time, opening your hearts and embracing whomever is returning to your life will do amazing things for the healing process moving forward.