For the love of our little meltdown makers -

Thanks to the weather, Lizze is in the midst of a massive Fibromyalgia flare up

For the love of our little meltdown makers


Meltdowns are absolutely overwhelmingly for everyone involved.  Unfortunately, they’re an all too common occurrence when you’re raising kids on the Autism Spectrum.

Meltdowns are not a disciplinary issue. The person having a meltdown is physically in distress, usually as a result of sensory overload. With limited ability to physically cope or having simply reached the threshold of what they can take, the body purges.

Meltdowns are the body’s way of purging all the anxiety, stress and whatever else has built up as a result of sensory overload.

Elliott had a massive meltdown this morning but I’m not entirely sure what it was about.  I think he was tired and overwhelmed already.  Whatever happened, just sorta pushed him over the edge. 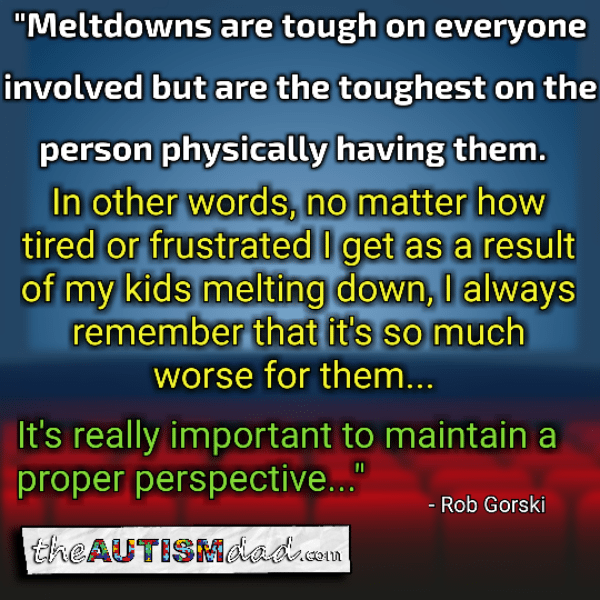 When Elliott melts down, he not violent but he’s really, really loud.  Emmett on the other hand is a lot bit of both..(and yes I know that’s not proper grammar)..

Of course Elliott’s meltdown began at the moment I’m laying down for my nap this morning.   Lizze was handling him well but Elliott was just escalating and so I got him to reluctantly lay down with me and I scratched his back.

I don’t think he ever fell asleep but I know if I dozed off.

Anyway, this helped him to calm down and move ahead with his day. Sometimes the best way to deal with my kids meltdowns is snuggle time.  Other times, not so much and they just need their space. My kids are always treated with compassion and understanding during these times of extreme distress.

As for Elliott, he’s been in a decent mood since and I’m hoping that the purge was enough to sorta ground him.
Meltdowns are tough on everyone involved but are the toughest on the person physically having them.  In other words, no matter how tired or frustrated I get as a result of my kids meltdown, I always remember that it’s so much worse for them…