The boys ended up going to bed early last night because they were exhausted, fighting too much and weren’t going to make it much later or was it that we weren’t going to last much longer without losing our minds?  Either way, it was an early night.

They each came downstairs for one reason or another but on the last trip, requested that they sleep together on the bottom bunk.  We were totally okay with that as long as they weren’t fighting and went to bed.

It took a little bit for them to get settled in but they did and this was the result.  ☺ 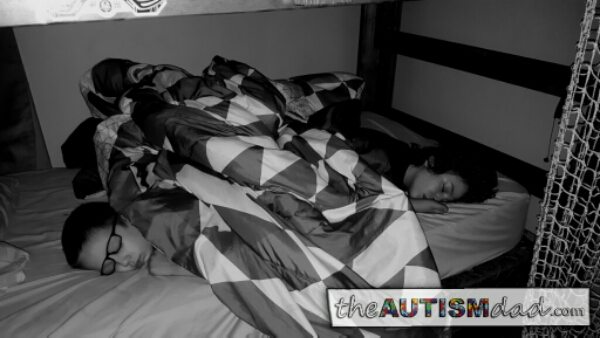 These are my sleeping angels, all uncomfortably lumped together. I don’t know how they fell asleep like this but they did and so it must have been comfortable enough. ☺

We really are blessed to have these little mischievous, meltdown makers in our lives.  As difficult as it can be, I don’t know what I would do without them but I do know there isn’t anything I wouldn’t do for them.

I really like ending my night with things like this because it helps me remember all that I’m fighting for….

It’s nice to see that they can get along, even if it’s because they’re sleeping.. lol