It’s been a really long day and while in the end we all survived, it was fraught with challenge.

Focusing on Gavin in particular, I’m saddened to say that he’s beginning to really struggle again. We’re seeing more and more bladder issues but thankfully, it’s not as bad as it has been but it’s disruptive nonetheless.

Gavin insisted on coming with me to pick up the boys from school. I wasn’t super excited about that idea because when he’s having these bladder issues, he’s constantly going into the school to use the restroom.

If he’s not going back and forth to the bathroom, he’s bouncing around the car doing the potty dance. 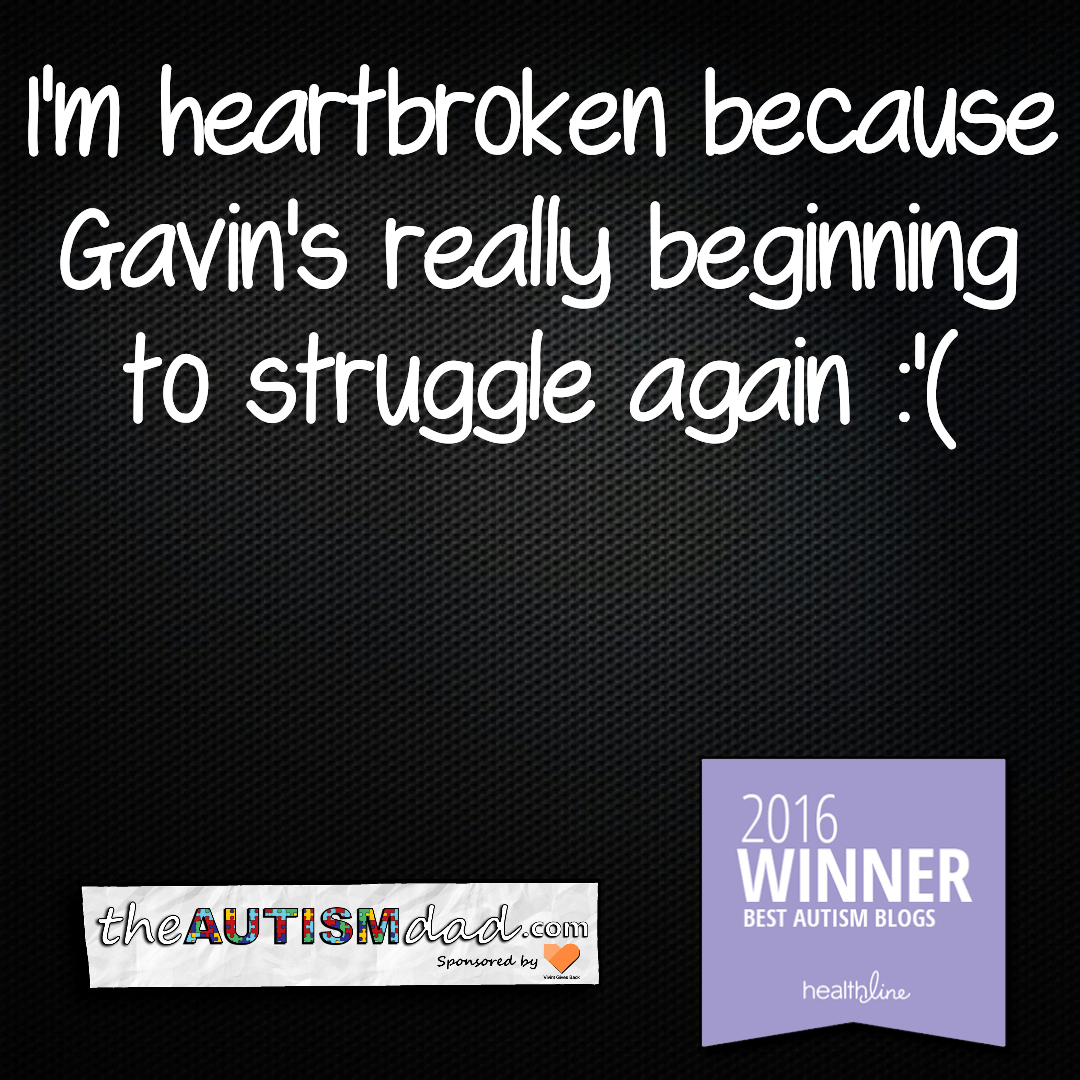 I let him come with me today against my better judgment but I guess I thought we would give it a try and see how he does. As it turned out, it wasn’t a good thing.
Having said that, at least we know for sure that he’s struggling with this again. It’s hard to tell at home because he spends so much time in his room and he can go back and forth to the bathroom without anyone knowing.

The other thing is that these missions he’s going on, are getting weird weirder and that’s saying something.

Today he spent all his money on passes for his friends to visit the arcade. He said it cost a lot of money but it was worth it. For those new to our story, these friends of his are schizophrenic hallucinations and while what he did was sweet, it’s hard not to see this as a bad thing.

Gavin’s been on 700mg of Clozapine per day for about a week and a half now. We will be back at 800mg per day beginning the first week of November.

It seems like we have reached a stalemate, where neither problem is willing to succumb to the medication. The bladder issues are creeping in once again because of the higher dose of Clozapine but the schizophrenic symptoms are not really improving. In fact and I think Lizze would agree, he seems to be getting worse or at least he’s being more vocal about them.

I can’t adequately express how much this kills me. As his father, it’s so hard to know that he’s going through this and there’s very little I can do to about it.

I’ll confess this to you as well before signing off for the night.

One of the hardest things I deal with on a personal level is the guilt I feel for being frustrated with Gavin as a result of these things he’s going through. I’m overwhelmed when he bombards me with his missions and incessantly talks about his latest tablet games.

I’m frustrated with the bladder issues and how much they impact every attempt to go anywhere.

The very fact that I feel these things, puts a crippling amount of guilt on my shoulders and that guilt is very heavy. It impacts my everything and it’s hard not to let it do so.

That feeling is at odds with the fact that I very much understand that I’m human and I can’t help but feel the things I do.

To anyone who doesn’t get this, please consider that a blessing and I mean that. If you do get this and understand where I’m coming from, my heart goes out to you because I know how hard this is.