It's heartbreaking when someone you love is massively depressed -

It’s heartbreaking when someone you love is massively depressed


The boys have been at my parents tonight and Lizze and I have been taking advantage of the time to finish some Christmas things up, as well as physically regroup.

It’s been a long week and I’m grateful to see it come to a close.

We’ve had a stressful week because Lizze isn’t doing so well right now.

Lizze began taking Lithium a few days ago (as she’s discussed on her blog) and while it’s too early to really expect any major changes, from my perspective, it seems to helping. 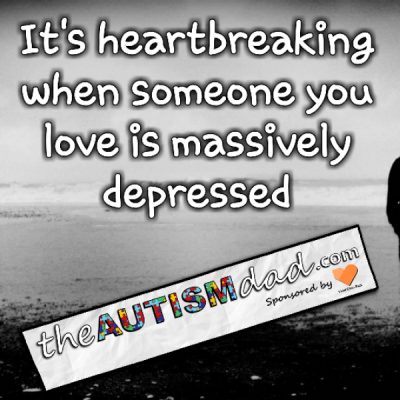 This is a really tough situation because it doesn’t really matter what I think. What matters is how she’s feeling and she’s not feeling better, at least not yet. Like I said, it’s still too early.
The doctor said that after ten days we’ll check her levels and go from there. I believe he’s thinking that Lizze will be at a therapeutic level by then.

What sucks is that until then, she will be suffering with this massive weight on her shoulders known as depression.

I don’t know if there’s anyone battling depression in your life but it’s heartbreaking to watch. Depression is something that leaves one feeling powerless and I know that first hand because as you know, I battle depression myself as well.

What Lizze is going through is pretty extreme because her depression is related to bipolar type two. Someone with bipolar type two depressed by default and whenever the pendulum swings in the direction of depression, it’s extreme.

We will survive this and Lizze will find the light at the end of this long, dark tunnel.  I’ll be there for her every step of the way. 💙☺️
Please visit www.themamaspace.com and read Lizze’s first hand account of what living with bipolar type two. She’s very open and honest..