So my day has gotten more and more frustrating as the it’s gone on. Most of the frustration revolves around Gavin. He’s not trying to drive me crazy but he’s managing to do an exceptional job, with little or no effort. O_o

First of all, I’ve been battling with him because he has this thing for putting things right on the very edge of the table. 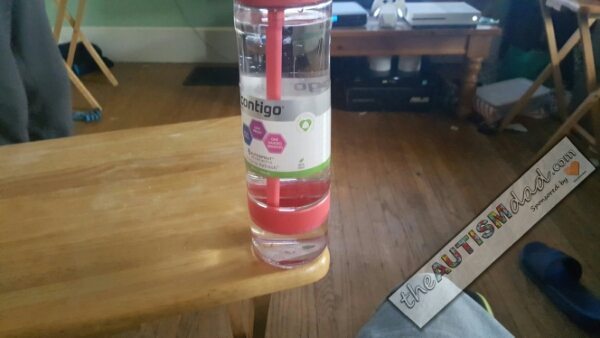 I don’t know why he does this. Maybe it’s OCD or just a bad habit but I can’t tell you how many times this has caused a huge mess. Water bottles like this are less of a problem but he puts everything on the edge of the table.

You may even recall that this is what led to him breaking his last tablet.

What typically happens is he puts something at the very edge of the table and then bumps into it, causing whatever is there to come crashing to the floor.

The picture below shows the results of him putting the giant fruit bowl on the very edge of the stove today and then accidentally knocking it off. Huge mess and glass everywhere. 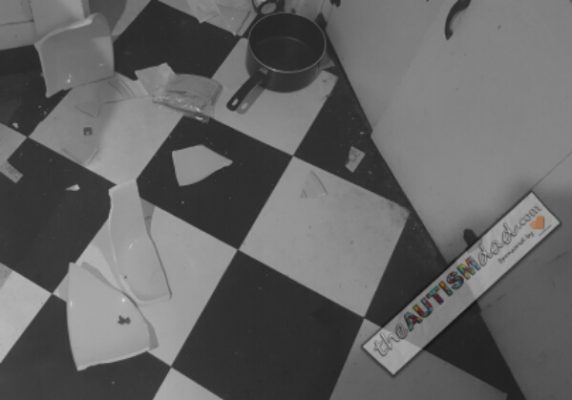 Does he do any of this on purpose? No he doesn’t…  Does that make it any less frustrating? Fuck no it doesn’t!!!!!!

I’m overwhelmed by all these things because it’s constant.

We have to think ten steps ahead of him most of the time.  In many ways, it’s like having a toddler in a clumsy teenage body. We need to Gavin-proof the house anymore.

I love this kid to the moon and back but holy shit, he’s exhausting.  This is the kind of stuff that made my hair runaway and my beard turn white. 😁

The reason I’m sharing this is because it’s okay to be frustrated and overwhelmed by the complications our precious kids with special needs can bring into our lives.

I’m human and I have limits. I have feelings like anyone else, and rather than be ashamed of them or be swallowed by the guilt of feeling them, I’ve chosen to use this as an example to help other parents realize that they aren’t the only ones feeling these things.

This is all part of the special needs parenting game.  ☺

Seek and you shall find. I’m at my wits end with my son. He is high functioning. Basically he’s just over the line on the spectrum. I have been taking him to counseling since he was 5. You don’t often see kids with existential angst at 5. The only thing they did was give him adderall & antidepressant. He was high functioning enough to know how to get by through high school. At 22 he was in a bad car accident. He wasn’t hurt physically, but emotionally it was a different story. His coping mechanisms weren’t working anymore & he completely spiraled out of control. He was officially diagnosed with High functioning autism.

Almost 3 years later and it’s a roller coaster ride. For the record, I hate roller coasters. I’ve been seeing a therapist who specializes in autism disorders. She’s been a tremendous help in learning how to deal with a 25 year old teenager.

Thanks for helping me feel less alone in the world.

Your very welcome. I’m alway here if you need to talk. ☺

Let gavin know that everything has to be put away from the edge of the table or it will smash and he will have to pay for new things that he breaks.

Your posts help me feel like I’m not alone .
And I’m not terrible for feeling mad at what happens… https://t.co/nNHRbRqt3Q

I’ve noticed this a lot lately in the autism community. Autism parent pages have started to resemble adolescent cliques rather than advocating. I can respect all perspectives involved and the honest concerns from all perspectives but I think it’s crossed a line. I think the argument has been prioritized above the support. Wrapping our arms around each other isn’t the first instinct. We were given the gift to see and accept true differences but that lesson goes to the wayside when accepting autism parents differences. I personally see nothing wrong with the way you’ve expressed yourself here, and boy can I relate in more ways than one and not just with my autistic son but in many realms of my life. Autism is different in EVERY home therefore the way in which we express it will be different.

Sure, it’s totally fine to admit it… but the internet lasts forever and we have a knack for eventually finding things, or getting bullied at school for what our parents said online because the bullies found it first. Just a thought, considering.

I would say if he puts it in the corner of the table like that every day, that is OCD! Fun picking and cleaning that kind of nonsense up, isn’t it? :)…ugh…hang in there

Oh boy. I hope he doesn’t get upset when you move the stuff.

You know, he only gets upset because he put it like that in the first place. Does that make sense? He’s mad at himself for forgetting…

I would say if he puts it in the corner of the table like that every day, that is OCD! Fun picking and cleaning that kind of nonsense up, isn’t it? :)…ugh…hang in there

Oh boy. I hope he doesn’t get upset when you move the stuff.

You know, he only gets upset because he put it like that in the first place. Does that make sense? He’s mad at himself for forgetting…