How #Depression impacts my life -

Aside from that I have no complaints

How #Depression impacts my life

Depression has been a constant companion of mine since I was a teenager. I’ve spoken very openly about this war I’m waging, and I’m going to try and provide you with some further insight.

I’ve always referred to my struggles with Depression as a war because depression is a life long struggle, consisting of many battles. Some battles will be won, and others lost, just like any other war.

It’s important for me to share these battles because there’s such a lack of understanding in regards to mental illness in general but more specifically, Depression. My hope is that my story will inspire others to share theirs as well.

I've always referred to my struggles with Depression as a war because depression is a life long struggle, consisting of many battles. Some battles will be won and others lost. -Rob GorskiClick To Tweet

Unfortunately, at this moment in time, I’m struggling a bit more than I normally am. I’m feeling very overwhelmed by life and all the challenges I’m facing as a husband and father. 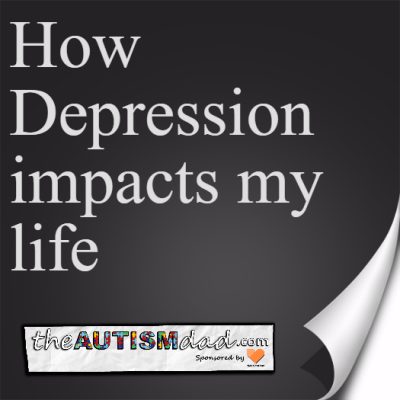 The boys are all amazing kids, and I love them completely. My wife is my best friend and has been for 15 plus years. At the same time, everyone has demanding needs, and it’s my job to meet those needs as best I can. Don’t get me wrong; I love my family and will always do what I can for them, but it’s exhausting and overwhelming.

If I had to describe how I was feeling in one word, desperate would be relatively close. It’s just an overwhelming feeling because there are so many things I need to do but I can’t, for a multitude of reasons. It’s a helpless feeling to have so many things in the balance and not be able to do what needs to be done.

It’s hard to be objective when you’re dealing with yourself. I do know that when these feelings creep up on me like this, it’s a safe bet that I’m getting my ass kicked by Depression.

Cognitively, I know what’s going on but that doesn’t allow me to feel any better about it.

Depression sucks and it’s not easy to talk about. Having said that, it’s important that people feel comfortable talking about it and more importantly, seeking help if they need it.

Did you ever get your own therapist? Not any family or group stuff…one for you. That would help you deal with a lot of this and also give you an hour a week to figure out you.

I do go to therapy alone on occasion. It works out pretty well for me.

I’m guessing the question was intended to find out not only whether you have individual therapy sessions, but whether you had found your own therapist, one who was separate and apart from everyone else in your family. From your response I’m guessing the answer is no. I get it- there would be so much groundwork to lay working with a new therapist, but to have someone who can truly focus on you, and you alone, just might be able to give you a different perspective on things than someone so close to the entire situation could possibly be able to. Just a thought.

Therapy for me is less helpful than say, walking. Walking is the absolute best way for me to process things. Talking does help but truthfully, speaking with our family therapist alone is best for me because there is so much going on, I’d spend weeks just trying to bring them up to speed.

Speaking bluntly…You are doing yourself a huge disservice and won’t have much lasting success without getting to the core of your depression. Working with your family therapist will help you learn how to deal with your issues In the context of managing your family, but you aren’t dealing with you at all and that will continue to bubble up.

I’m really not sure why you don’t think it would help either…since you speak of the therapies for your wife and family are ‘positive things’.

Depression isn’t always rooted in a thing. It’s biochemical in nature and requires medication to fix. Exercise and therapy can help as well but there’s nothing I need to get to the bottom of.

My life is hard and it’s not going to get easier. There’s no getting to the bottom of that.

I take my meds, write and talk when I need to talk. That’s what works best for me and always has.

It doesn’t have to make sense but everyone is different and I simply don’t do things the same way that you would.

As with Kim,I appreciate your thoughts but I know what I’m doing.

This is easily the most ridiculous thing you have written. Have a good night, Rob.

I’m sorry you feel that way but we don’t always have to agree.

We can absolutely disagree, but you saying that there is nothing to your depression, but ‘depression’ is akin to someone saying that vaccines cause autism.

And for someone that was horrified at Toni Braxton and Jenny McCarthy for being so ‘reckless’ with her opinions, I figured you might try and be a bit more thoughtful with your post on the topic.

This can’t be what you meant, Rob. This suggests that you believe that all you can do for your depression is hopefully get the right prescription, and short of that, nothing, because you’ve got it all figured out and know what works for you.

This seems a bit cavalier. I would just ask you to re-read what you wrote above, and think about it from a different perspective – if someone who suffered from depression was asking for your advice, and was clearly suffering, but was resigned to thinking that it was all about the medication and that there really was little else he should do to manage the depression, since he claimed to have a handle on it?

Your responses just seem a bit surprising, particularly from someone who is often very vocal about his “war against depression.” Obviously I don’t really know, but it seems like you, just like many people who suffer from depression, could benefit from some discussions regarding strategies regarding managing the depression on a day to day basis, particularly in light of the stressful life you lead.

I could be totally wrong, and if I am, I apologize. But it might be possible that you don’t have the perspective on this.

And I’m not really going to get into this, because of course what the hell do I know, but there could be a multitude of reasons why a therapist providing services for an entire family may not be in the best position to provide the best services for an individual in that family, whether it intentional, unintentional, or something in between.

I guess I’m just curious as to what one does, after medication, exercise when one feels motivated and/or has the time, writing and talking, and therapy on occasion, to wage a war against depression? Is it acceptance of the circumstances? Does that acceptance help? When the depression does hit, what if anything, can be done other than riding it out?

I hope this isn’t viewed as being antagonistic- I’m just curious as to what your take is on this.

I’ve been dealing with this for a very long time and I have learned what works and what doesn’t. I do everything I can for myself.

What I take offense to is when people assume they know more about what I need than I do or my doctor does.

I never said it was all about medications. I said that depression is biochemical in nature and meds are needed to correct that imbalance.

That said, talk therapy, diet and exercise are very important as well.

Just because I don’t see a shrink all the time doesn’t mean I’m not helping myself.

My life is such that there’s no way for me to really get ahead of things. My doctors has told me that as well. What I focus on is maintaining and gaining whatever ground I can.

That’s why I reacted the way I did.

To presume that you (figuratively not you personally 🙂 ) know more about me, than I do, is misguided.

Thanks for the response, although some of it seems more of a defense to others’ comments, but I get it, at least to some extent. I stand by my comments about an outside therapist, which was really my main point when I entered the discussion. Not a knock against your current therapist, but rather a reality given the circumstances.

And yes, no question that people commenting on your situation from afar can’t possibly know what’s going on enough to speak with authority. But there certainly can be circumstances where some objectivity from outside sources can be helpful, even when they can’t possibly know the whole situation. Is this one of them? Damned if I know.

I feel like you’re doing yourself a disservice by seeing only Dr. Pattie and only seeing her by yourself on occasion. Even if you’re there by yourself, Dr. Pattie is still your family therapist and is still Lizze’s therapist; there is not a lot of leeway for her to concentrate on you and the issues which are at the core of your depression. Saying you won’t go to someone else because it would take weeks to get up to speed is ridiculous. That is true of anyone going to therapy.

Your opinion is based on what would work for you. Trying to tell me what is best for me or anyone else is terribly misguided.

Perhaps my approach wouldn’t work for you but it does for me. Everyone is different.

As for being ridiculous, again you should never pretend to know what’s best for someone, especially without first hand knowledge.

Seeing Dr. Pattie is best for me because I’ve tried others in the past and it’s frustrating because they don’t know what I’m dealing with, aside from what I tell them.

Working with someone who knows everything about myself and my family is best for me because it helps to provide me with insights that anyone else wouldn’t be able to provide. She knows first hand what goes on in my life and so she’s inbthe best position to help.

I appreciate your concern but honestly, I’m a bit irritated by the way you make these kinds of assumptions.

You don’t have to register with any of those. You can simply log into the site. If you haven’t registered yet, that would be the easiest thing for you going forward. Having said that, I’m not sure why it’s giving you such a hard time. May I suggest you wipe your browser cache because perhaps there are some cookie issues.

Please let me know if it continues to be a problem.

I’ve tried from my phone and iPad too, as well as my home laptop. I noticed that Braden signed in with a different name so I’m wondering if he is having the same issues.