I'm pretty sure Gavin's manic, maybe psychotic and here's why -

Does your family have a go-to food for your child with #Autism and/or #Sensory Processing Disorder when all else fails?

I’m pretty sure Gavin’s manic, maybe psychotic and here’s why


This has been something that’s been slowing creeping in for awhile now and I just haven’t really had it up and in my face like this in awhile.  I’m talking of course, about Gavin’s schizophrenic hallucinations.

They’re never going to be permanently removed from his life and his meds usually control these pretty well but he’s always going to cycle.  In fact, the last time we saw Dr. Reynolds (a few months back), this was the topic of discussion.

What sorta kicked me in gut today was what he told me while we were playing Minecraft together.

Gavin was getting his Friday IVIG infusion and he and I were working on our Minecraft Realm together. He said, Dad, I have a report from home base. 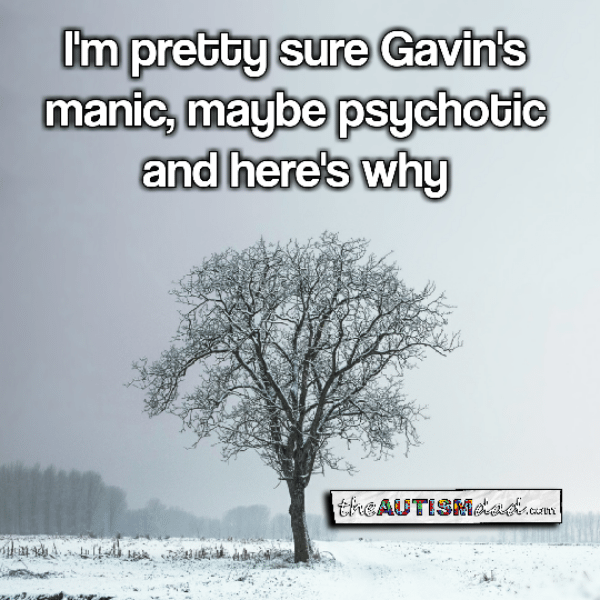 I assumed that he was talking about our main stronghold in Minecraft but of course, I was wrong.  He informed me that he was talking about the secret robot base in his room, where Sonic and Knuckles live. Just so we’re clear, he’s referring to a secret base, inside the head of a giant robot, inside of his real life bedroom, that only he can see. 😔

What ensued was a 45 minute, psychotic rant about how one of his enemies had mutated Sonics DNA and as a result, Sonic lost his confidence.  Apparently, he’s been going on quite a few missions with Sonic and his crew. Then it was something about building an invisible obstacle course for Sonic to practice on and regain his lost confidence.

At some point, it all turned into the Mwa-Mwa-Mwa-Mwa-Mwa that makes up the language of all the adults in Charlie Brown’s world.

The only other thing I pulled from his avalanche of disorganized thought was that someone was trying to kill him.  That caught my attention and will be discussed on Tuesday with Dr. Pattie. I’m going to talk to him about that in the morning again and see if I can get more information on what that’s all about.

I’m not being an asshole by sorta tuning him out after awhile.  You have to understand that when he cycles and goes manic or psychotic, he talks a million miles an hour. His thoughts are scattered and this goes on incessantly until he cycles back out of it.  It’s extremely difficult to follow him for even short periods of time, let alone 45 minutes.

When I refer to him as being psychotic, that simply means he’s lost touch with reality.  It doesn’t mean what most people think it means.  It’s sort of a step above manic, if that makes sense and it’s just something that Gavin experiences from time to time.

All it really means at this point is that we have to keep a closer eye on him and maybe put a camera in his room to have a better idea of what we’re dealing with.  He’ll know the camera is in there and what it’s for but he’ll forget about before I walk out of his room.

The camera will also be able to tell us if he’s getting up in the middle of the night and going on missions.

My level of concern on a scale of one to ten is about a five or six right now.  That’s partly because of how enthusiastically Gavin spilled his guts but mostly because someone is trying to kill him.  That’s actually concerning a bit because that can lead to paranoia and him feeling like he has to protect him and us. That’s not a good thing.

As I said, he usually hits these cycles a few times a year and for some reason, it seems to always be in the Summer or late Fall.

There really isn’t anything that can be done accept ensure his safety and be more aware of what he’s doing.  He’s not dangerous in any way, so safety isn’t a concern for the rest of us.

With any luck, he’ll swing out of it in the next week or so.  Maybe it will be a bit longer or shorter.  There’s really no way to know…  We just gotta ride the wave until it hits the beach.