Putting My #Autism Family Back Together: What Happened And Why (Part Two) -

Putting My #Autism Family Back Together: Understanding The Last 19 Months (Part One)

I’m pretty sure Gavin’s manic, maybe psychotic and here’s why


In the previous post (Putting My Family Back Together: Understanding The Last 19 Months), I tried to bring some clarity to the last 19 months of our journey.  I wanted to better explain what took place and clear up some misconceptions.  The idea is to bring closure to this whole thing, so we can move forward and focus on other things.

We talk about how Autism Parenting takes its toll on a person, marriage and relationships with friends or family. We talk about the need to take care of ourselves because if we don’t,  we can’t be there for our kids.  We even talk about just how unbelievably stressful Autism Parenting is and how the stress that Autism Mom’s face on a daily basis is only comparable to the stress levels that combat soldiers experience. 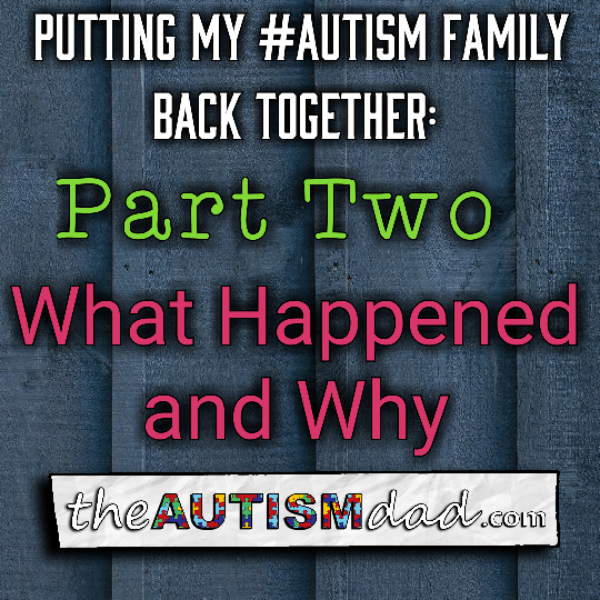 We’re going to talk about it today because that’s exactly what happened to Lizze.

When Lizze left, I knew something was wrong because the woman I’d known for almost half of my life had changed so dramatically that she was unrecognizable to me and anyone that had known her on a personal level, like my entire family for instance.

The decisions Lizze made during the first half of our separation showed me that something was still wrong because that just wasn’t the Lizze I knew.

To basically get to the point and help to all understand what happened, I’ll explain it like this.

We’re all human beings and that means that we all have limitations or breaking points.  It’s easy to sit there and say that you will never reach that point but Lizze and I thought the same thing.

Turns out we were wrong.

What happened to Lizze could happen to any of us, whether we’d like to admit it or not.  Lizze was so devoted to our family, even through all of her personal struggles with chronic pain, PTSD and all the challenges that came along with raising three kids with Autism.  Gavin was extremely difficult to manage and part of that was because he was going through a very, very difficult time.

Gavin’s biological father was very abusive, both physically and emotionally.  Lizze left before the abuse spread to Gavin and as a result, an 8 year long custody battle ensued that took us all the way to the Ohio Supreme Court before finally winning and being able to protect Gavin.

What Gavin experienced at the hands of his paternal family, is what is believed to have triggered much of his mental health issues.  Like Lizze, he was also diagnosed and dealing with PTSD.

After all this was over with, Elliott and Emmett were diagnosed with Autism.  Emmett and Gavin both developed major health issues.  Gavin’s were extremely life threatening and on one occasion, we almost lost him.

After about 10 years, Lizze’s health began to suffer and she was diagnosed with a chronic pain disorder. She had to have a medically necessarily hysterectomy as a result of the complicated pregnancies with Elliott and Emmett. She went through menopause in her very early 30’s and that took a huge toll on her both physically and emotionally.

The point I’m trying to get across is that essentially what happened was that Lizze finally reached her limit.  She finally hit a wall in October of 2014. She basically ceased functioning on a level needed to be a parent.  She had reached a point that she had run herself into the ground, so far that she couldn’t see a way out.  It changed her and that’s when she left.

During this separation she was basically lost and trying to find herself.  It took her time to climb far enough out of that massive hole to realize that she needed to get help.

As soon as she realized that she needed help, she immediately found the help she needed and began the journey of finding herself once again.

Over the last say, 6 months, I began noticing changes in her and I was beginning to see the woman I’d married.  I didn’t know about the help she was getting until much later on but I did see the changes it was helping her make in her life.

Once she found herself again, she dealt with many of the issues that had been weighing her down for so long.  She got back on her and I was made aware of what was going on and that led to us reuniting.

She’s continuing to get help for herself as we move forward.  We are getting help for ourselves, so that we never forget to take care of ourselves and each other.  We are also continuing with family therapy to make sure that everyone is moving forward and we address anything that may come up along the way.

That’s the long and short of it.

Here’s part of what makes this so complicated.

I don’t blame her for anything that happened.  I don’t. She had reached a point where she wasn’t Lizze anymore and I truly believe that nothing was done intentionally, if that makes any sense.

Having said that, just because I don’t blame her for what happened, doesn’t mean that what happened didn’t have a very real impact on myself and especially the boys.  This is the part that most people have a hard time getting past but it’s something we have to work through.

This whole thing was tragic.  It was tragic for many reasons but I think it had to happen. Having come out the other side of the tunnel, I can see all of the things that have happened during this period of time that wouldn’t have happened otherwise.

I learned a great deal about myself.  Gavin grew up a great deal. Without them sorta constantly triggering each other, both Lizze and Gavin have come out of this with a healthier relationship than they’ve probably ever had.

Lizze has the tools needed to better manage the stress in her life and so do I.

We’ve learned that we have to take the time to focus on ourselves or we won’t be what are kids need us to be.  We have to focus on our marriage and make sure to spend whatever time together we can.  We’ve never had any major or even remotely serious problems between us but life can still get in the way and that’s something that marriage counseling can help us navigate.

I want to be very clear that about this.  I’m not making excuses for what happened.  Rather I’m providing the explanation for why they happened. It doesn’t undo anything but it does provide insight into the mechanics behind her actions.

Again, this could happen to anyone.  Our hope is that by sharing this with you all that you can become more aware of the things that can happen if you don’t take care of yourself.  We’re hoping that this will help to put this part of our lives to rest and continue to move forward.

You don’t have to agree or support us but please keep your negative comments to yourself.  Anytime a family can survive something like this, without becoming a statistic, it’s something to be celebrated.  The boy’s have their Mom back, stronger and healthier than ever.  I have my wife back and we will use what we’ve learned from this to move forward with our lives and hopefully, help others to avoid the same thing….

I’m happy to answer thoughtful questions, respectfully asked. Some questions I won’t answer because we are trying to ensure some level of privacy but I’ll answer anything I’m comfortable answering.

Pretty interesting read, thanks for the candor. I think a part 3 on what you did to change/get to a better place would be equally interesting to read.

<3 You exhibit amazing patience and understanding. I&#039m very happy for all of you.

<3 You exhibit amazing patience and understanding. I'm very happy for all of you.

Pretty interesting read, thanks for the candor. I think a part 3 on what you did to change/get to a better place would be equally interesting to read.