I fear Gavin's starting to lose it and that's not good -

A little validation never hurt anyone

For the first time in forever……


I wanted to talk about how Gavin is doing. Lizze and I have been talking about this today and we both agree that Gavin’s not doing well.

For starters, he’s forgetting a great more than is typical for him. Things he would normally do really well, he’s unable to complete. His threshold for frustration is very, very low as well.

He’s debriefed us on a few missions over the last few days and while he’s definitely still in a psychotic break or episode, it’s his dreams that are beginning to worry me.

His dreams are centered around death or dying. 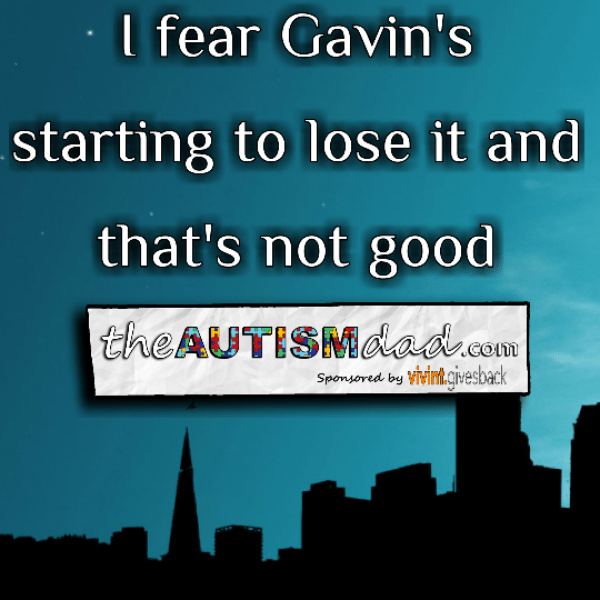 The other night, he had a nightmare that my Mom died.  She died because someone had stabbed her in the throat with a pitch fork.  Gavin says that he woke up and was crying.  He didn’t want to bother us, so he just settled down and went back to bed.
This is one of several recent dreams/nightmares he’s had recently but obviously the one with my Mom dying does sorta freak me out a bit.

So Mom, if you read this before I call you, sorry..  I’ll catch you up later.

Anyway, it’s not so much who died or got hurt but rather the overall trend of dreams centering around people being murdered.  It’s pretty creepy and Lizze and I are both a bit worried.

On the positive side of things, Gavin spent some time cleaning his room today.

Whenever Gavin is manic or in a psychotic episode, his organizational skills become nonexistent.  His bedroom completely falls apart and will stay that way until he starts to swing back out of the phase.

The fact that he cleaned his room, may be a really good sign that he’s beginning to come out of this.

The reason the dream trend has us concerned is that Gavin has a very lengthy history of going to very dark and dangerous places, during these bouts with psychosis.  It hasn’t happened for a long time but when it did, this is how it started.

We will be seeing his psychiatrist in a week or so and hopefully, we’ll be able to figure this all out.