It was a rough day. I’m not going to sugar coat it because that wouldn’t be the truth. Having said that, a rough day doesn’t always translate into a bad day.

We were surprised with the boys not having school today. It was for an unusual reason but it was nice having everyone together.

I ended up getting a ton of work done and even hit the grocery store with Gavin before dinner.  He wouldn’t stop talking but he was a huge help and I’m really proud of him. ☺ 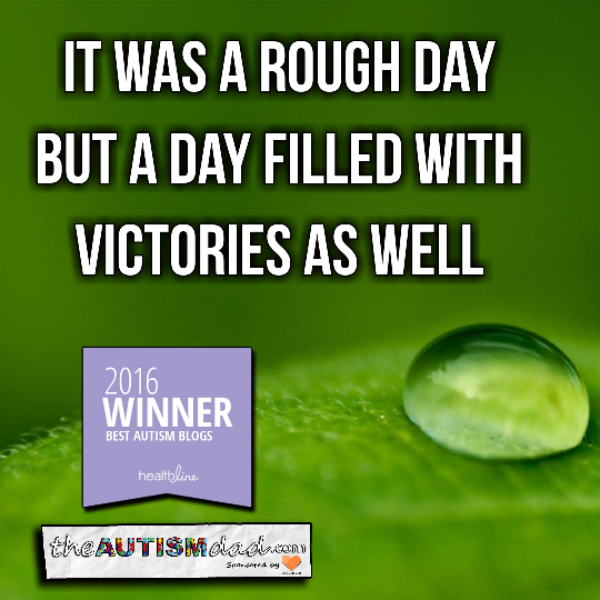 Elliott finished up his homework, even though he didn’t want to. He was a bit resistant at first but after a few minutes, he totally owned it and finished everything without a complaint. A lot of positive reinforcement was had, as well as quite a few hi-fives.. I’m super proud.. ☺
Emmett was very Emmett today. Sweet and mischievous would be the best way to describe him.

My sister picked up Elliott and Emmett in the afternoon and took them for ice cream. This was for their somewhat recent birthdays. Gavin had already had his turn, so he and I hung out for a bit.

After the boys went to bed, Lizze and I continued our Supernatural binge watching tradition of late. It’s time we spend together, after the kids go down for the night.  It’s been a really positive experience and something I missed terribly during our separation.

Being an Autism parent is always stressful, at least in my experience. There are so many things to worry about and most of those things wouldn’t even register on most peoples radar. At the same time, there are so many moments of awesome in between. ☺

I have walked away from today with positive memories. There’s things with each of the kids and of course Lizze as well.

Maggie and the ferrets are in there also..

There are things to talk about that took place today but that’s for another post because I’m filing this one under victory….. ☺