Positives and Disappointments: Four months after my wife moved back home -

My favorite moment of the day

Positives and Disappointments: Four months after my wife moved back home


I’ve tried to be as transparent as possible during the almost two years my wife and I were separated. I focused on my personal struggle with the monumental loss, as well as how the boys and I were managing on our own, with me as a single Dad.

I wanted to try and set a positive example of how to make sure the kids come first, despite my personal feelings.

When my wife and I reconciled about four months ago, I began sharing that journey as well because it’s not easy to move past something going like that but we did it. 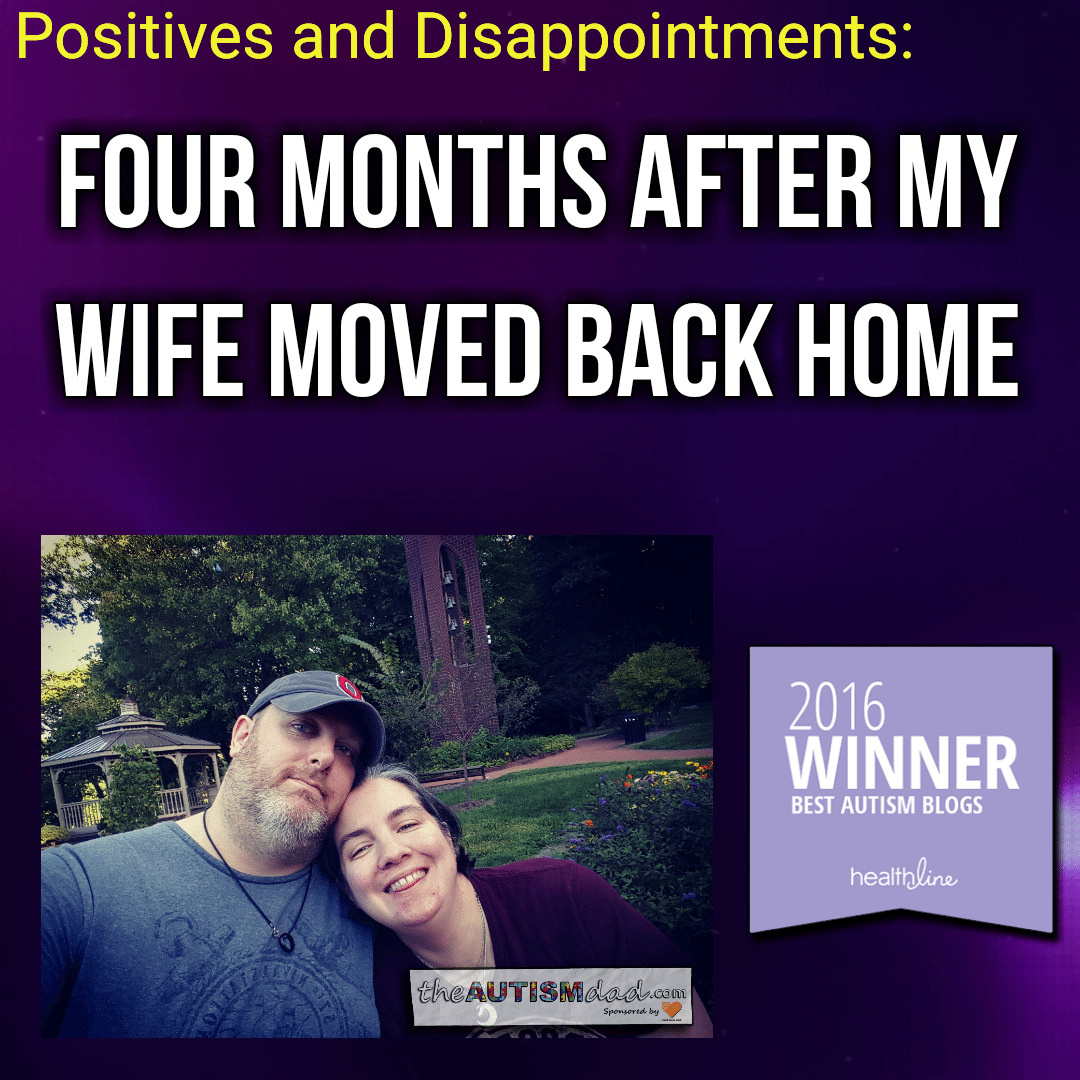 As we approach our fourth month back together, I want to take this opportunity to sorta share how things are going. There’s a great deal of positive but there’s also some struggle as well and I feel it’s important to understand these things.
I feel like things at home are going as well as they can. Lizze and I are great. Lizze and the boys are great. Lizze and Gavin are doing so well, they deserve their own sentence.

All these things are very positive.

There are still some transitional things we’re working on. For example, the boys come to me by default.  It’s what they’re used to doing and I’m reminding them that they need to go to Lizze as well.  Kids on the Autism Spectrum get stuck in these routines and patterns and while they’re so happy their Mom’s moved home, they still follow the patterns that they’re used to.

It’s not personal in any way. It’s simply habit.

Lizze and I have learned from our many mistakes and are making a significant effort to take care of ourselves. It’s so easy to get lost in the boys, we forget to focus on our own needs.

We are doing weekly date nights and while it’s a poor man’s date night, it works for us. It’s usually Netflix and cheap pizza or maybe ice cream from the corner Walgreens.

The whole point is that we put the world aside for a the evening and spend time together.  It does make a difference.  ☺

While we had to cancel our first marriage counseling session last week because Emmett shoved q-tips into his ears and had to go to the doctors, we are rescheduling everything now.

I think the toughest part is also the part that shouldn’t matter but it does and that’s family.

Our relationship with our respective in-laws is great and that’s such a blessing because after situations like we went through, that’s not always the case. Lizze and I are very lucky to have the parents we have.

As for the rest of our family, majority are very supportive and we are so grateful for their love and support. Unfortunately, not everyone seems to subscribe to whole let’s move forward together approach. Attempts have been made that I feel go above and beyond what Lizze should ever have to do in order to promote healing but it’s not been enough.

I’ll be very honest. I’m both disappointed and hurt by the approach taken by some but at the same time, they aren’t my focus. It’s much tougher on Lizze because she really values these relationships. It’s not that I don’t. It just that I know that I can’t change what other people are going to think or feel. I’m choosing to focus on Lizze, the boys and those who can see all the positives in putting our family back together.

I don’t have the time or energy to harbor grudges and frankly, their the ones who will be missing out.

I’m sure they’ll come around some day. Everyone is at least civil and that’s a positive thing but I really am disappointed.

Marriage isn’t easy. Raising kids in general isn’t easy either. Being married, while raising three kids with Autism and other special needs can be absolutely brutal.

The fact that we took some time off and came back together, having learned from past mistakes and being stronger than before, is something that should be celebrated for more reasons than I can list.  That’s how I view this whole thing.

I’m happy, the boys are happy and Lizze is happy. At the end of the day, does anything else really even matter?