Something is happening to Gavin and it’s not good :(

It’s been a really rough morning


It’s time to play a little game called catch up. When we met with Dr. Reynolds last week, we also made some decisions about Elliott and Emmett. Unfortunately, I got tunnel vision with all that was happening to Gavin that I never got around to this.

After speaking with Dr. Reynolds about both Elliott and Emmett, it was decided that we would be removing all of the medications, with the exception of their ADHD meds. There were several reasons for this but the main one is that the medications don’t appear to be doing anything. 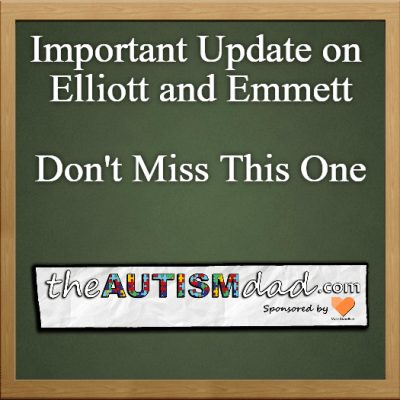 Over the next 15 days, we will be weaning them off of these meds as per Dr. Reynolds instructions. I don’t expect to see any negative changes in behaviors as a result. There is a very good chance that Elliott will drop a few pounds that we gained and a result of one of his medications.

With or without the meds, the boys are still a handful and we will continue to deal with those problems but at least the boys won’t be on meds that aren’t of benefit to them.

Lizze and I have no issues giving the boys medication if it’s deemed to be in their best interest.

We research the crap out of each and every medications before the boys ever take it. We also trust the doctors in our life and respect the advice that provide us.

I actually feel really good to have the boys be off their meds in the very near future. We’ll take it a day at a time.