Lizze and I worked for at least an hour to help Emmett tolerate something on his feet.

We tried countless shoe/flipflop/slipper/crocs combinations both with and without socks. Nothing worked.

Lizze worked to desenitize his feet with deep pressure and spending some time in the rice box. We have a large box fill with dry rice and Emmett likes to stand in it. It has helped in the past but not today. 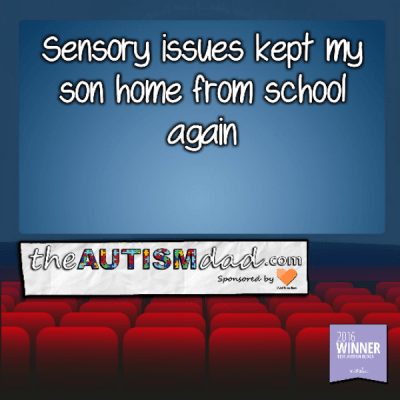 He wanted to go to school so badly but his body was fighting him at every turn.

Part of the problem is that he’s getting a head cold. He’s got a runny nose, congestion and was complaining of a headache yesterday. While he would struggle with shoes and socks on a good day, when he’s sick like this his tolerance is even lower.

I spoke with the school and they thought the same thing.

I had to get Elliott to school and leave Emmett at home.  This is obviously a problem and one that is proving very difficult to work through, especially as the weather has turned cold.

We’ve talked about home schooling but don’t want to go in that direction if we don’t have to. Emmett loves school but is having a really hard time getting there sometimes…

Sensory issues suck for a million reasons and this is just one of the many….