A knock down drag out morning

I wanted to discuss how our meeting went today at the school. We were there to talk about the issues surrounding Elliott and being bullied. As I stated earlier, the principal took a really good approach to addressing the issue with the students.

As for the meeting, it was a little tense and I know that I probably upset some people but that was never my intention.

This is such a tough situation to be in because on one hand, we have Elliott upset because of unverifiable things going on within the classroom. On the other hand, we know how sensitive Elliott can be, but because we don’t know for sure what’s going on, there is a driving need to make sure he’s physically and emotionally safe. 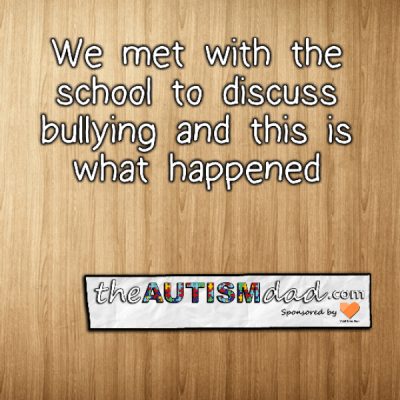 I try very hard not to be one of those parents who get irate with the school over insignificant things and assumes that everything my child says happened, happened exactly the way they said it did. I know that’s not always the case.

We also have a very long and very positive history with the school and I don’t want to jeopardize that either.

Finding a balanced approach is probably the best option and I feel like I mostly accomplished that.

I wasn’t perfect and I know I ruffled a few feathers but as a parent, I do what I feel is right, especially in the moment.

Anyway, as for the meeting today, things went pretty well.

We’ve established a plan and the main part of that requires that Elliott and this other kid remain separated. This eliminates most chances of anything happening going forward.

Communication will also be improved as well and you can’t go wrong with improved communication.

What was probably the most helpful thing for me personally, was when one of his teachers sorta validated what Elliott was complaining about. Does it amount to bullying, probably not.

Why was this helpful?

It was extremely helpful because it all boils down to this. Elliott and his classmates can get along fine and then out of nowhere, this classmate will say something mean or inappropriate to Elliott. Elliott being as sensitive as he is, takes it straight to heart and becomes really upset or hurt.

When it comes to this kind of thing, Elliott needs to learn to better deal with people saying mean things. That’s just how kids are to each other at times. Does it make it right that this kid is hurting his feelings, of course not, but it’s also not that big of a deal.

People say mean things to me all the time. It doesn’t make me feel good but it also doesn’t break me either. Elliott needs to be empowered and learn to ignore these kinds of comments.

This is of course, only related to the verbal/emotional things that went on. There hasn’t been anything physical in a long time and again, nothing was ever witnessed, so who knows what was going on there.

The bottom line is this, Lizze and I walked out of the school feeling pretty good about things.

We thanked everyone and made sure they understood how grateful we were to have worked through this. Everyone from the teachers, to the interventionist and the principal were very helpful in clarifying things.

I’m personally sorry if I came off a bit harsh but it was a difficult situation. I really do respect and appreciate everyone’s help in this matter.