I’ve been accused many things in my life.  None of which would ever hold up in a court of law..  lol

Joking aside, I find it really interesting when I get accused of spoiling my kids with Autism.  People see my actions from the outside and don’t have an understanding of what goes on behind the scenes.

When you are a parent to a child with Autism or three, you learn very, very quickly to pick your battles.  It’s not about letting them get away with anything or giving them whatever they want.  It’s about preserving that extremely fragile balance between addressing everything that ideally would be addressed and recognizing that some things just aren’t worth it.

Do I cater to my kids? Of course I do because the nature of Autism is such that they need me to.  Do I coddle them on occasion? You better believe it, because I don’t have an instruction manual and so I have to what seems right,  in the moment. 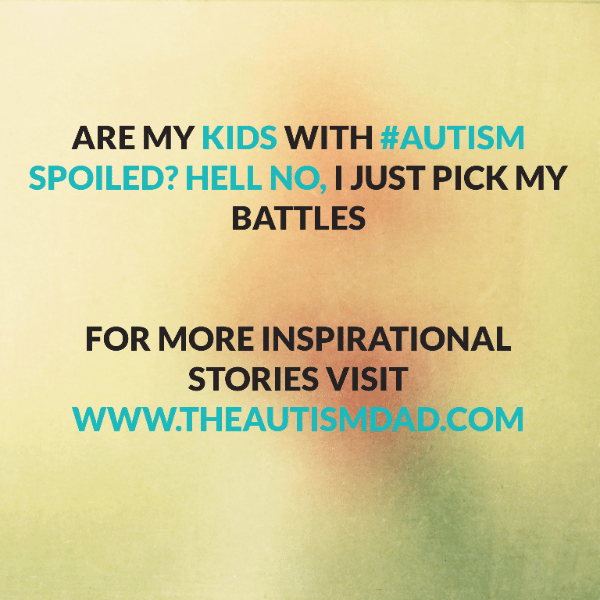 Do I spoil my kids and let them get away with whatever they want?  Hell no!!! If for no other reason than doing so would make my life infinitely more difficult.

What people don’t realize is that if I allowed them to get their way, it would never stop.  My kids generalize the shit out of everything and if they think they can push me until I give in, I will never see the end of it.

When I am knee deep in a situation and I decide whether or not to allow my kids to do or not do something, I have to take a million things into account.

At the end of the day however, it all comes down to picking my battles.

If it truly isn’t that big of a deal and I can better keep the peace by allowing something to happen, I make the choice to allow it to happen.  I’m not bullied into it or looking for an easy out. At the same time however, there’s something to be said about self-preservation.

Do I really want them to have 3 pieces of candy? No I don’t but is it worth what will likely transpire if I decide that they should have an apple instead? Fuck no it’s not worth it.

I have to be able to survive and if I picked every battle, I’d lose my mind. I also need to have the energy to follow through on anything I say as well.. I can’t afford to spend everything in one place and so I have to very carefully choose where and with whom I spend my limited resources on.