Putting My #Autism Family Back Together: Understanding The Last 19 Months (Part One) -

Today’s #Autism Quote of The Day: The Truth About Meltdowns

Putting My #Autism Family Back Together: Understanding The Last 19 Months (Part One)

Look, I get it.  You’ve all experienced the last 18 or 19 months with the boys and I through my blog.  I’m so grateful for the outpouring of support during what was often, a very difficult time.

Since announcing a few weeks ago that my wife and I have reconciled, there’s been some backlash.  While I understand that most of said backlash is well intentioned and simply out of concern for myself and the boys, you needn’t worry.

It’s really hard to have a true understanding of what happened because I never shared all the details because I was trying to do the right thing and I felt it was best for the boys in the long run.  Having said that, I feel as though that approach has caused some confusion and in some cases, even some misunderstandings about what happened.

I need you to please understand and respect that you will not have all the nitty gritty details because there’s still a need for privacy.

I also need you all to remember the nature of this blog and my style of writing because sometimes it’s easy to forget that there’s a great deal of unprocessed, raw emotion behind my words.  You will at times, have almost real-time access to what I’m thinking and feeling in the heat of the moment.

Having said all that, I want to help you understand what happened and why things are better now. This will likely be a two part post because of its length, so I’ll start with clarifying things that took place of liver the last 18 months or so.

When Lizze moved out in October 2014, I was completely shocked. I was caught off guard and quickly became an emotional mess. 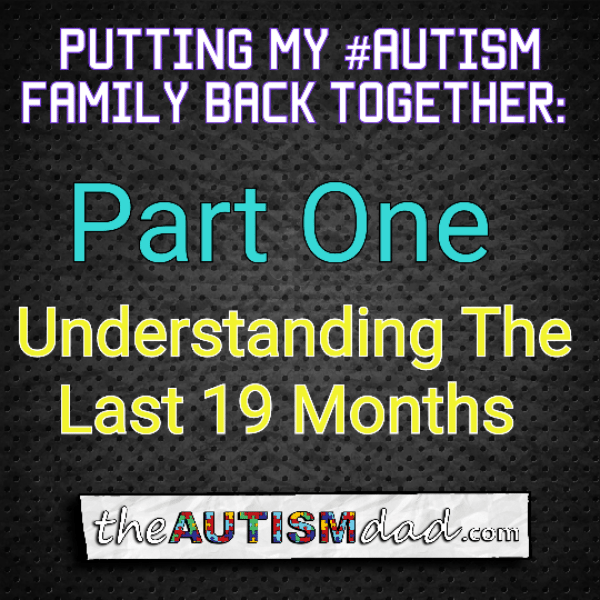 I knew something was wrong because the changes I was seeing were coming from the woman I’d spent almost half my life with. I know her better than anyone else in the world does and I knew something was very wrong. That wasn’t something I effectively conveyed publicly, although I did try but within the confines of my private life, I have stood by that assertion from day one.

There was a great deal of confusion/emotion and it took time before Lizze and I were really even were able to have a productive conversation because I was very focused on wanting to help and she wasn’t yet in a place where she recognized that she needed it.

One of the things that was decided right off the bat was that her visits were going to need to be supervised.  That wasn’t a court order, it was Lizze that requested that because she knew she couldn’t handle the kids on her own at that point.  Speaking of courts, they were never involved in this process at all. Nothing was ever officially declared or filed.

It’s absolutely true that the boys and I were heartbroken and Lizze seemed to have moved on without much problem but it wasn’t that simple.  I wasn’t privy to everything that was going on behind the scenes.  All I saw was someone who had changed so profoundly that I didn’t recognize her anymore.  That didn’t mean I stopped loving her and I think that was pretty obvious.

I tried to share what the boys and I were experiencing because I felt it was important to understand what can happen to families like mine, after years and years of experiencing a level of stress, anxiety, fear and exhaustion that is immeasurable but proven to be on parents with the level of stress combat soldiers experience.

My other goal was to try and be a positive example for how to put the kids first and not let personal feelings get in the way of doing that.  I think I succeeded in that goal, at least in part because I was approached by organizations that help families going through divorce.  They asked if I would be willing to help provide guidance and advice on working with the other parent, to ensure the kids are put first, especially in cases involving Autism or Special Needs children.  I never shared that with anyone but it happened.

Through all the raw and unprocessed emotion, I tried to always take the high road. I never shared specific details about what had happened, even when doing so would have really helped put things into perspective. For starters, I still had no real idea what had truly happened to cause this separation and I was trying to balance shareable information and privacy.  That’s not always easy to do…..

I made it a point to never speak ill of Lizze and wouldn’t allow anyone else to as well.  As my readers, you respected that and I truly appreciate it.

I felt there was a difference between sharing the facts about what happened, that directly impacted our lives and talking negatively about Lizze.  Some people didn’t draw the same distinction and that’s okay but it was never intended to taken as bad mouthing.

As I’m human, I was subject to things like frustration and anger.  I know that came though at times but that’s to be expected, at least it should be.  It was a really tough period of my life and I did the best I could. I know I made plenty of mistakes along the way and I own every one of them..

When it came to Lizze and I coming full circle and reuniting our family, it came as a shock to everyone but me.  I began seeing this coming a few months before anything was shared publicly.  In fact, it wasn’t even something that Lizze and I had talked about.

Sharing the changes I was seeing wasn’t something I could share publicly because I didn’t want anything getting back to the kids and giving them false hope. Frankly, I didn’t know anything for sure, it was just a feeling that I couldn’t shake.  During this period of time, I was still experiencing frustration with the whole situation and it was far from ideal.

I didn’t know what to do or what to say, so I didn’t say anything about it to anyone, aside from my parents, therapist and one or two very close friends that I trusted enough not to say anything publicly.  That was it.

I’ve never been through anything like this before and while it may have seemed pretty cut and dry from the outside, in reality it was anything but.

Truthfully, I’ve only recently learned everything that had happened and why.  That’s because Lizze had only recently come to terms with everything and realized that she needed to get help. Recently is relative and in this situation, I’m talking about several months or more.

Most of my initial suspicions turned out to be relatively on target and that opened my eyes,  helping me to gain a much better understanding of what led up to her leaving. It also made putting things back together, not only possible but a reality.

I’m going to split this up into two separate posts because it’s sorta long and I really want you to let this sink in before reading the rest.  The second part will publish soon and provide basic insight into what happened and why things are better now, but it’s not yet ready.. I don’t feel I owe anyone an explanation but at the same time, I want to help reassure everyone that this is a positive thing and clear up any confusion or misunderstandings.

If I could like this a million times I would. 🙂

Thank you so much. I truly appreciate it.

If I could like this a million times I would. 🙂

Thank you so much. I truly appreciate it.