Before I go any further, let me say that Gavin is safe.

We were on our way to the dentist and Gavin started having bladder issues again. We had something that needed replace under warranty at Best Buy, so we opted to do that on the way out of town because Gavin needed the bathroom anyway.

This has happened a million times before and this is what usually happens.

I’ll go do whatever needs done at customer service and Gavin goes straight to the bathroom. He knows exactly where it is and he’s gone a few minutes before returning to my side. 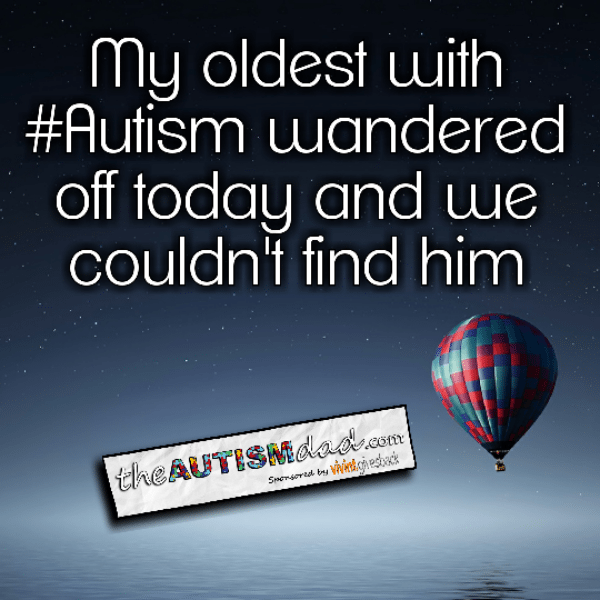 We worked up to this over a period of time and lots of practice.  There’s never been an issue until today.
I finished up at customer service and then waited for Gavin.  When he didn’t show up, I went looking for him. When I couldn’t find him and,  it occurred to me that he may have gone back out to the car, which he shouldn’t have but who knows.  I couldn’t call Lizze to check because Emmett was using my phone and he was in the car with Lizze and Elliott.

I hurried out to the car and discovered that he wasn’t there either.

At that point, I was really getting worried.  I pulled the car around and dropped Lizze off at the entrance to Best Buy so she could look around for him in there.  I drove around a the massive parking lot, making sure he wasn’t wandering around the parking lot.

I kept making passes by the entrance to make sure he wasn’t standing there.

After about 15 minutes, Lizze walked out of Best Buy, with Gavin in tow.

She had actually gone to security and was in the process of having them search and call for him over the store intercom, when Gavin just sorta wandered up to Lizze as though nothing had happened.

I’m gonna be honest, this scared the shit out of both of us.

Gavin said that he didn’t see me at the front desk, even though I had been standing there waiting for him.

I have no idea where he was because I couldn’t find him and neither could Lizze.

Lizze and I were scared out of our minds and it wasn’t something we could hide from the other kids because they were right in the middle of it and we’re terrified as well.  There was no way to shield them in the moment.

Like I said at the beginning, Gavin’s okay.  Unfortunately, I don’t think he understands what happened.  He knows we were upset/worried and is sorry for that but does he truly get it? I don’t think so.

Clearly, we have to reevaluate some things and take measures to ensure this doesn’t happen again.

I won’t speak for Lizze cause I’m sure she’ll share her own thoughts at some point. As for myself, there’s a mixture of emotions running around inside of me.

I’m relieved that he’s okay.  I’m angry that this happened in the first place and I feel guilty for allowing him to go to the bathroom by himself. I’m also worried because I don’t think Gavin learned anything from this.

We’re going to have to keep Gavin on a short leash because clearly he isn’t in a place to be allowed that level of independence, at least for right now.

This is only the second time in Gavin’s life that something like this has happened.  I think we have to look at him and take the same precautions that one would with an Alzheimer’s patient because he has good days and bad days.  On the good days he’s sharp and with it.  On the bad days like today, this is what can happen.

Cognitively, Gavin just isn’t there right now.  I don’t know if there will be an upswing but historically, there has been, at least to a point.

I don’t know if this is related to the psychotic break because this is more cognitive decline than loss of touch with reality.  Although, maybe he went on a mission and got lost in that world for a little while.

This was an eye opener and a wake up call….