Things should calm down today


It’s been a trying day from start to finish.  We had victories and moments of sheer terror today.

I’m going to skip the part where Gavin wandered off and ended up lost for short time that seemed like forever because you can read that here. I wrote a post about that earlier and frankly, I don’t have the energy to rehash it right now.  Just check out the link if you want to catch up on that. 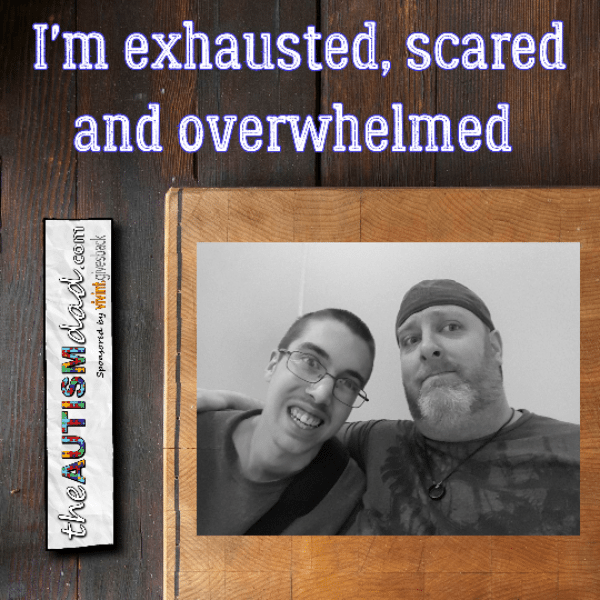 While we were getting everyone ready for the out of town trip to the dentist, I told Gavin that I wanted to trim his sideburns.  They were getting kinda scraggly and needed touched up.
He told me that he wanted to do them himself, using the new razor he got for Christmas last year.

He does a pretty good job shaving and he was insistent on doing this himself.  I was trying to get the other two ready so I told him that was fine, as long as he was comfortable doing it.

Next thing I knew, he was freaking out.  When he came into the living room to show me why he was upset, it took all I had not to burst out laughing. It was one of those things that’s hilarious but at the same time it wasn’t because he was so upset.

I don’t know what he was thinking but it’s like going into the bathroom to trim your mustache and ending up shaving your eyebrows.  I just don’t see how something like that happens but it did and we now had to deal with it.

He let me take a picture but I promised him I wouldn’t publicly share it.   I want to show Dr.Pattie because we’re seeing a pretty significant cognitive decline and this is just one example.

I ended up having to shave his head because it was that bad and there was no fixing it.

The boys (Gavin and Elliott) had dental appointments this afternoon and despite the excitement of Gavin wandering off, we made it there right on time.  Thankfully, both boys did really well.  Lizze went back with them, while Emmett and I waited in the lobby.

The boys did great. I wasn’t surprised that Gavin did well because things like this don’t bother him. Elliott was nervous but held it together.

Gavin has to go back because part of his front sheared off many years ago.  His old dentist told us it was just a stain but he needs to get it cleaned and filled.  This is on the face of his front tooth and apparently, the enamel on this tooth never totally formed.

Other than that, no cavities.  ☺

Behaviorally, Gavin had some issues while we were at the dentist. Apparently, Gavin was trying to walk into the room while Elliott was getting x-rays. Lizze called him back but he didn’t listen.  Then he was leaning on something and pressing buttons.

Lizze tapped him on the shoulder and tried to pull him back.  Gavin then aggressively pulled away from her.

I didn’t know the context of why this happened at the time but I saw Gavin pull away like he did.  He’s been doing this lately.  This is the first time he’s done this to Lizze but he’s done this to me on a few occasions. I’m not sure what this is all about but I do know that it’s not gonna fly.

As for Elliott, he has a couple of cavities and will need to have them filled.  Elliott doesn’t know this because he would freak out and then shutdown, until after it was fixed.  He wouldn’t sleep or eat because his anxiety is so extreme.

Everyone thought it best not to worry him until it was time for the follow up appointment in a couple months.

When we finally arrived home, we were completely spent.

Truthfully, I was still coming down from Gavin wandering off.  Lizze and I had a serious discussion about what happened and what we need to do to ensure we can protect Gavin from Gavin.

We also talked to Gavin about how he pulled away when Lizze was trying to pull him back from somewhere he wasn’t supposed to be.

He was really sorry and apologized.  He didn’t have an explanation for why he’s been doing that though. We made it clear that he cannot get aggressive like that.  All we’re trying to do is keep him safe and when he doesn’t listen or hear us, we have to get his attention somehow.

I’m really getting worried about Gavin at this point.  He talked about some crazy shit that went down on his latest mission today. His level of functionality is greatly diminished and I don’t know if this is an acute thng or if it’s a new level of decline.

Gavin has a form of Autism known as Childhood Disintegrative Disorder and it’s characterized buy a steady,continuous and overall decline in both physical and emotional health. Some kids plateau at some point and sorta say in one place.  In Gavin’s case, he’s been on a steady decline since he first began to regress at roughly age three or four.

I’m so tired and so worried.

I don’t know what to do and frankly, nobody’s going to be able to tell us what to do either.  That’s one of the many things that absolutely sucks in regards to rare physical and emotional health issues.

Almost everything Gavin has is beyond rare.  There’s either very little research or no research at all because there aren’t enough people impacted to justify to cost.

I really feel like I’m drowning in all this stuff.  There’s nothing I can do to fix any of it and that goes completely against my character.  I’m a healer and a fixer. I was a paramedic for so long because I enjoy helping others amd fixing what can be fixed.

With Gavin especially, there’s nothing that can be fixed or made better.

All we can do is pretty much wait to see where this journey takes us.

With that said, I’m going to try to get some sleep.  I’ll share more later but please keep Gavin in your thoughts and prayers.