Today's been challenging, overwhelming, frustrating and heartbreaking, with a smidgen of awesome on the side -

Today’s been challenging, overwhelming, frustrating and heartbreaking, with a smidgen of awesome on the side


It’s been a really interesting day here in The Autism Dad household. By interesting I mean challenging, overwhelming, frustrating and heartbreaking, with a smidgen of awesome on the side.

The truth is that I was overwhelmed by my kids today, especially Gavin.

Elliott and Emmett would get along for a little while and then fight over what amounted to misunderstanding or not wanting to deviate from their set way of doing things. 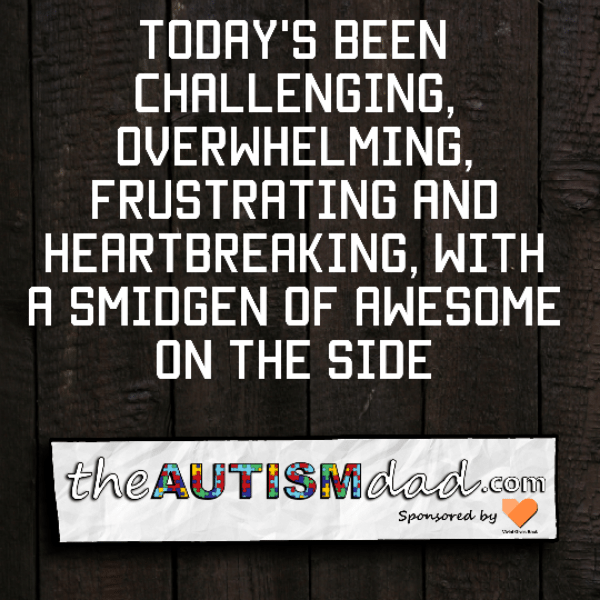 We had front row seats to several meltdown today and while front row seats are usually a good thing, when it comes to meltdowns, not so much. lol
The main story tonight revolves around Gavin once again.

Gavin’s in a place where he’s telling us everything that pops into his head. This is almost compulsory because I don’t think he’s doing this to drive me crazy but it’s driving me crazy nonetheless.

This isn’t the first time we’ve seen this.

Typically, this is a solid indication that he’s boarded the manic train. I don’t know what to call this stuff anymore because it’s all sorta evolving or maybe devolving is a more accurate term.

Listening to someone tell you everything they’re thinking can be overwhelming in any situation.

Listening to Gavin constantly verbalizing all the crazy shit that’s going through his head is even more overwhelming because while it makes sense to him, I don’t have a clue what he’s talking about most of the time.

As a parent, this really sucks because I never want to shut any of my kids down when they want to speak to me. I always want them to feel like they can come to me about anything.

At the same time, there’s only so much I can take before I want to shove pencils into my ears, just to create silence.

Typically, I set limits for Gavin because he’s a talker by nature and it slowly just erodes my sanity away.

Sometimes I’ll even schedule time for him to tell me anything he needs to but when the timer goes off, we’re done.  I’ve even had him write up mission reports, so he doesn’t have to talk to me about it all the time.

Unfortunately, that’s far less practical when he’s in one of these phases, for lack of a better word. It just doesn’t work. It would be like me asking you not to blink or breathe or get thirsty. He just doesn’t seem to have any control over this.

Gavin’s such a good kid (all my kids are) and I try so hard not to lose my patience with him, especially when it’s in regards to things outside of his control.

I think most of the time I do pretty well because people are constantly telling me they don’t know how I can do this without losing my sanity and these are people who know first hand how challenging Gavin can be in this particular area.

Anyway, I want to end this on a positive note.

I never give up when it comes to my family, even if it requires seemingly endless repetition. Even if the outside world only sees all my failings.

This evening, I asked Gavin to help me make dinner. It just amounted to boiling pasta but it was a multistep process. First he cleaned the stock pot and filled it a third of the way with water, before placing it on the stove.

At this point, I turned the stove on because I don’t want him messing with the gas range.

He kept an eye on the water and decided when it was ready to receive two boxes of pasta. At this point, he very carefully poured the pasta into the pot of boiling water.

I made sure he was safe and frankly, he did a really good job.  I was/am really proud of him.  This isn’t anything Earth shattering and the general public won’t get it but this was really cool for me.

Last week, he helped Lizze make pancakes and she keeps talking about how fun it was to do something like that with him.

These are really positive things and I’m absolutely grateful for these victories..  ☺