It’s been a mix of meltdowns and warm fuzzies

It’s been a mix of meltdowns and warm fuzzies


The boys arrived home a bit on the early side today but it was a welcomed surprise because I really missed them. Gavin came home sleepy, Emmett came home in a good mood but Elliott began complaining the moment he walked in the door.

A large part of the last two hours has been spent with Elliott melting down because of issues between him and Emmett.

Elliott tries to control every aspect of his life, which probably isn’t that weird, especially considering his maturity level is that of someone much older than his ten years of age. 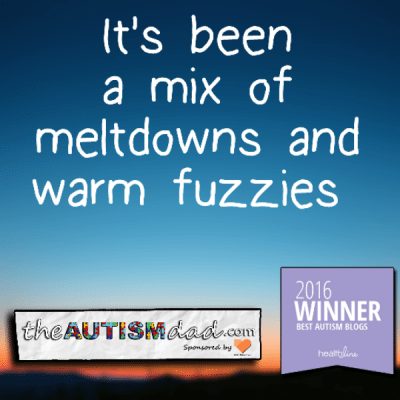 Regardless, he needs to understand that he simply cannot control everything, especially his brothers.
He was upset because Emmett wanted to use his little toy tank when they played but Elliott didn’t want him too because it didn’t match up with his ideas of what they should be doing..

Elliott’s always been like this and it’s one if his little Autism/personality related quirks. In regards to Emmett, this isn’t that much different than his need to have everything the same.  He freaks out if they each get a sucker and they each have different flavors. It’s just one of those things we deal with.

Aside from that, which was admittedly unpleasant, it’s good to have the boys home. It’s always a warm fuzzy feeling when they return.

Elliott and Emmett are each doing their own things right now and so the house is relatively quiet. ☺️