Today's Victory: One big reason I'm proud of my son -

I don’t have any shits left to give today

Will you stand with me?

Today’s Victory: One big reason I’m proud of my son


I want to take a few minutes and share how proud I am of Elliott. I’m proud of all my kids, sometimes for different reasons but those reasons are endless.

Today I want to talk about how Elliott has overcome something that he wanted nothing to do with.

We had signed the boys up for the after school program, at Emmett’s request. After talking to Dr. Pattie, it was decided that it was best to make Elliott participate as well because he needs and would benefit from the experience.

Elliott was very, very against this and didn’t shy away from telling us all about it.

Having now gone three or four times, he’s now actually enjoying himself and while he won’t admit it, he wants to keep going.  I’m so proud of him because he gave this a chance and now he’s found something that he’s having fun doing with his friends after school hours.  ☺ 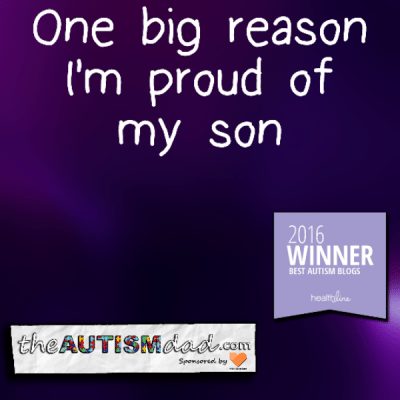 This is very good! Also shows why some resistance to new ideas should be (carefully) overcome at times. I say carefully because it’s hard to know where the line between resistance and emotionally too-fatiguing is.

This is very good! Also shows why some resistance to new ideas should be (carefully) overcome at times. I say carefully because it’s hard to know where the line between resistance and emotionally too-fatiguing is.