Does your child with #Autism still believe in Santa Claus?  -

I wish we had the energy to do more. Can anyone relate to this story?

A long overdue update on Elliott

Does your child with #Autism still believe in Santa Claus?


We all know that Santa Claus is a huge part of celebrating Christmas and believing in him is part of the magic. There are many things that can impact the way our kids with Autism perceive the world and that got me thinking.

I’m wondering if your child with Autism still believes in the magic of Santa Claus?

Our three boys on the Autism Spectrum are hardcore believers, especially our oldest who’s almost 17 years old. The other day, Gavin had made a mistake and broke something on accident. He was so upset and there wasn’t anything we could say to him that made him feel better. 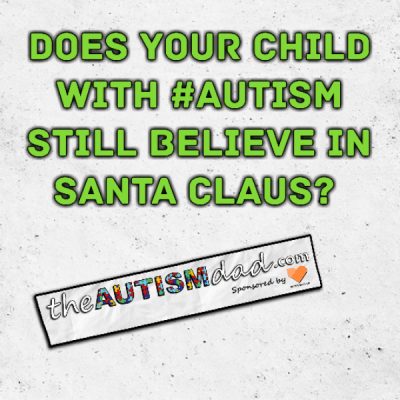 Once he settled down, he explained that he was afraid Santa was watching and wouldn’t bring him any presents because he broke something.
That’s pretty heavy for a kid to be thinking about.

We explained that Santa knows he’s been a really awesome kid this year and accidentally breaking something isn’t going to change that. He did feel better but it took a bit of convincing on our part.

I was wondering if your kids still believe as passionately as Gavin?