Starting the day with a massive meltdown -

MAJOR UPDATE: Here’s what’s going on with my wife

Starting the day with a massive meltdown

Massive Meltdown is the buzz phrase for today. Emmett has been up since about 3 am. I don’t know exactly why he woke up but he did and was basically up for the rest of the night.

Unfortunately, that usually means that his resources for dealing with the next day will be sorely lacking, making life more challenging for him.

True to form, Emmett didn’t have a good morning and could not cope with his socks. Overnight we received a couple inches of snow making his flip flops no longer an option.

I worked with him for twenty minutes without success. Lizze picked up where I left off and put in another twenty minutes, only she was eventually successful in getting him to tolerate both his shoes and his socks. Kudos to her for that one.

What sucks is that things were so bad for him up and until the point he was okay with everything.

The meltdown was exhausting, stressful and it set the tone of the morning for me.

At least Emmett made it to school, albeit a little late but he made it nonetheless. He was even in a good mood when he got out of the car, gave me a hug and ran into the school building.

There’s nothing quite like starting the day with a massive meltdown.. 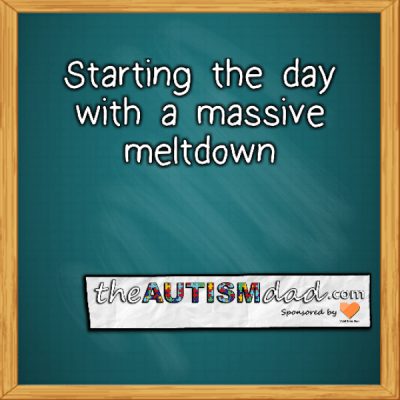