It's the not knowing that kills me as a parent -

He’s making himself sick over this stupid State testing


It’s becoming clear that Gavin’s struggling more and more. Unfortunately, there’s no way to know if this is another leg of his journey with Childhood Disintegrative Disorder, the result of changes to his medications or just par for the course.
His level of functionality is decreasing and doing so in weird areas.

Things like self-awareness are slipping. There’s never been a great deal of that to begin with, so this change is noticeable.
What do I mean by self-awareness?

Gavin had an ice cream sandwich this afternoon. About three hours later, I took the boys to the park to hunt Pokémon for short while before picking up their pizza for school tomorrow.

I wasn’t paying attention to Gavin’s face, like I usually do before we leave and I was caught off guard when I looked over at him while I was driving. He had ice cream sandwich all over his mouth and covering his teeth like a chocolate grill.

Look, I love him to pieces but that was disgusting and just one example of what I mean by lack of self-awareness.

I usually try to remind him of this before we leave to go anywhere or whenever I notice but with a houseful of kids I must stay ten steps ahead of, I drop the ball on occasion.

Gavin had been doing pretty in this area until recently. It’s never been perfect but most of the time he got the major stuff. Now, not so much.

What sucks for me personally is that I feel like I’m constantly riding him. At the same time, he needs constant reinforcement for these things because he doesn’t think about this stuff on his own. We’ve tried visual queues and it’s like they just aren’t there.

I’m always gentle when we remind him, but he gets so upset with himself. I always tell him that I’m simply trying to help him become more aware of these things. I’m not mad or disappointed. It’s my job to remind him if he forgets.

My intentions or approach make no difference in how he reacts. If I freaked out in him, he’d probably react the same way. 🙁 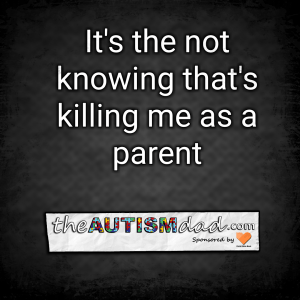