Take advantage of the time you have together

Holy shit! Gavin is not having a good day by any stretch of the imagination. He’s been on overload all morning long. It’s crystal clear that he’s extremely stressed out right now and actually in distress.

Maybe it’s from a long day with his grandparents and not because they’ve done anything wrong. Gavin had a great time but it still takes a toll. It would be the same thing if he’d been at my parents. This is just the nature of who Gavin is.

He’s been getting ahead of himself all morning because he’s acting before he really thinks about what he’s doing. I suppose you could also call this being a bit impulsive.

This morning’s festivities began when he went to do the dishes. I’ve always had him throw out the dish sponge at the end of each week and get a fresh one out of the drawer. I’ve also told him to make sure there’s a replacement before trashing the old one. 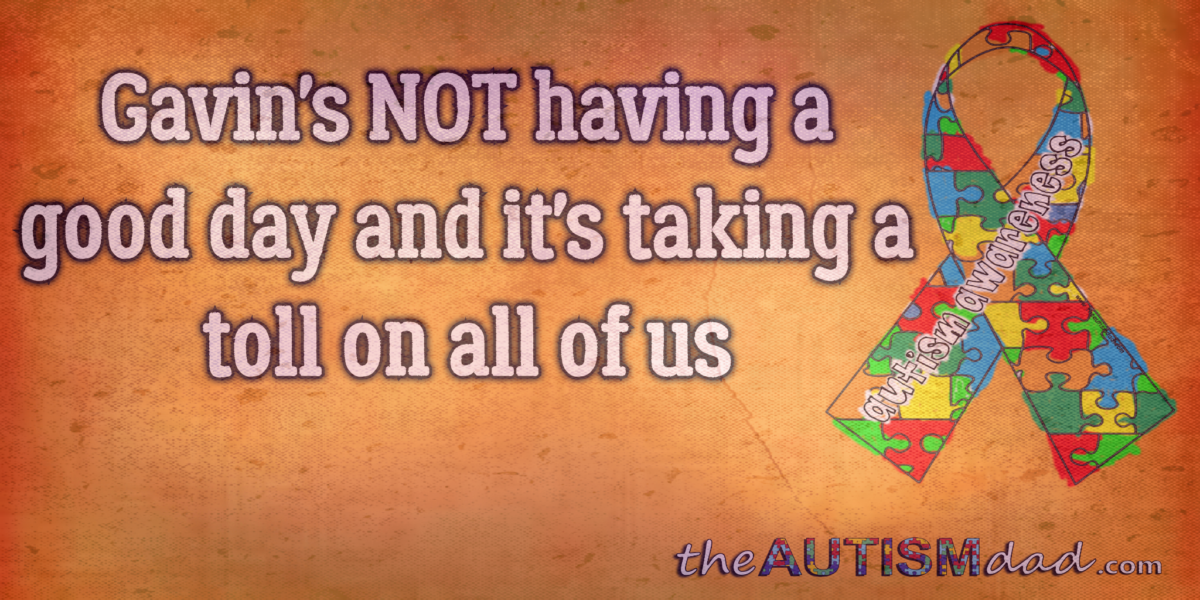 Unfortunately, he threw the sponge away before he checked to make sure there was a replacement. Needless to say, there wasn’t a replacement and this freaked him out.

Amazon automatically delivers new sponges at the beginning of each month and they were suppose to arrive today or tomorrow but they hadn’t arrived yet. That meant I had to run out to the store for new sponges, before anyone could eat breakfast.

Shortly after he threw away the sponge, he also decided to change the trash before he made sure we had new trash bags.

He was not happy with himself when he discovered that we were out of trash bags as well. The trash bags are chilling with the new sponges and waiting to be delivered.

I ended up having to buy sponges and trash bags. While it was needless and super annoying, it wasn’t a big deal but it clearly was to Gavin, because he was really upset with himself.

No sooner did I arrive home, open both the sponges and trash bags, we get a knock at the door. It turns out to be the delivery of sponges, trash bags and a few other items we have sent out each month.

That was a little frustrating for me because I couldn’t return the stuff a had bought a few minutes ago, as they had already been opened.

Gavin just could not get past all this and began twisting his legs and arms. He began slamming his feet on the floor and purposely twisting his ankles. He did eventually move on but only after a great deal of effort by Lizze and myself.

This by itself was bad enough but it was only about to get worse because he needed his IVIG infusion.

Gavin did is own IVIG infusion again and that’s awesome. Unfortunately, he wants to do it his way and not the way he’s been instructed. He likes everything to always be exactly the same and therefore trys to put the needles in the exact same spot each time. The problem with that is scar tissue. The problem with scar tissue is that it will either impede the flow of medication through the needles or simply causes them to leak at the infusion site.

Either one of these problems is enough to send Gavin over the edge on a good day.

He did things his way and unfortunately, there was major leakage as a result. He immediately began to panic and it just went down hill from there. Gavin’s been freaking out for most of the morning now and there’s not much we are able to do about it. He’s going to have to work through it…

I’m not angry with him but I’d be lying to you if said I wasn’t super frustrated myself. This is so fucking stressful because there’s no reasoning with him when he gets like this.

That’s so hard for him and you all.