I never got around to talking about Emmett not going to school yesterday. He was a dealing with a tummy ache on Monday and barely made it through the day. His teachers never called to tell us he wasn’t feeling well, even though he needed a trash can next to his chair while he sat with his head down.

When it came to going back the next morning, he was still dealing with a tummy ache.

We ended up keeping him home because we were with my parents the day before and now my Mom is down with the flu. He may have been legit getting sick. The other thing was that he ate his first burrito ever on Monday night. There was a school fundraiser through Chipotle, where half the proceeds went to the school. That may also have been part of the problem. 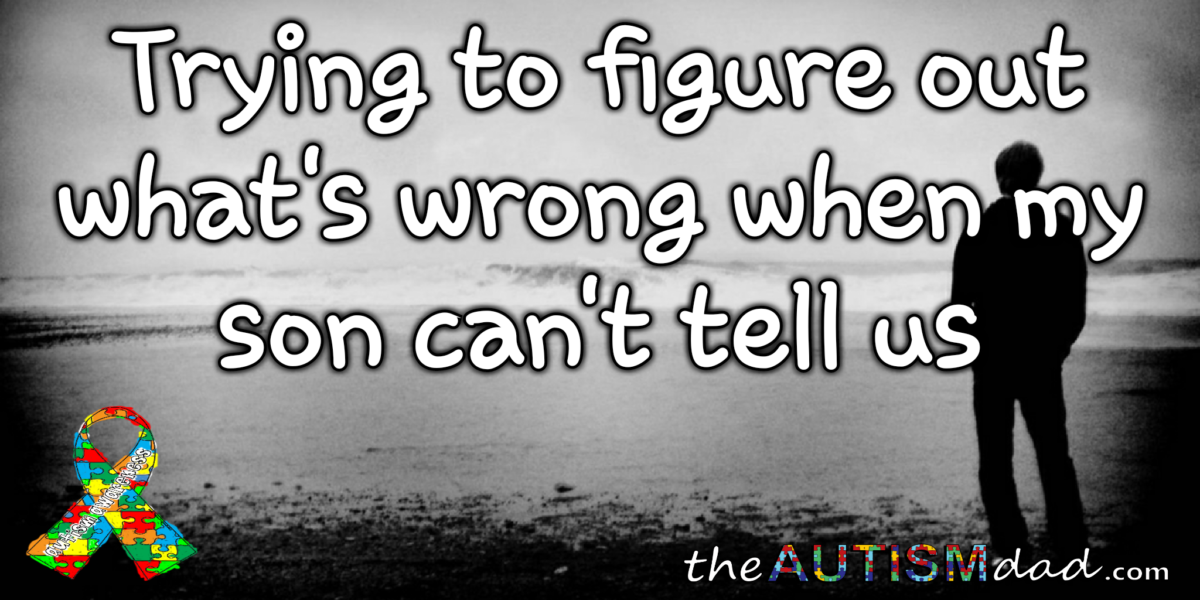 The whole tummy ache thing is not an acute issue and has been a problem for years. It always centers around school and you would think that something must be happening to stress him out or cause him severe anxiety. To the best of our knowledge, there’s nothing going on at school that’s a been a problem (aside from the recent incident with the pencil) and he loves being there.

We’ve spoken with his doctor and ruled pretty much all actual medical issues out.

Tonight we spent Tuesday night therapy with Dr. Pattie, focused on Emmett and his tummy aches. The general consensus is that these are the result of anxiety. It makes the most sense, especially if you know Emmett. The problem is that we don’t know what’s causing the anxiety or how to help him with it.

Emmett isn’t able to tell us what’s going on. He doesn’t draw anything concerning or complain about anything happening that makes him upset.

I wish there was an explanation or even a solution to all of this but there isn’t.

Dr. Pattie was even suggesting that there maybe a cycle to this, similar to his fever cycles. For right now, the goal is to help him make it to school this morning and we’ll go from there.

This entire thing is so overwhelming and I wish we knew what to do. Right now we’re feeling our way through the dark until we do.

When I was in second grade, I threw up nearly every day before school. Well, my teacher had picked on me, just a little. Wouldn’t have upset a less sensitive person than me. Back then the teacher and principal basically said it was all my fault. Now, of course, stuff would be different.

I was also unconsciously putting pressure on myself. Emmett can like school and see good things to do and still feel anxious about it. And throw in his friend having an episode and jabbing him with the pencil, Emmett may just not be entirely over anxiety about that. Does he have perfectionist tendencies? Those put anxiety on a person. It did on me.

Doesn’t mean he can articulate it, though. Which you all obviously know. I’m not giving advice as much as adding weight to your and the counselor’s conclusions.

Hi Rob- you’ve posted a few times about your back and I’ve been meaning to ask but kept forgetting… how is your weight? You haven’t posted a weigh-in Wednesday for ages and when I read about your back that is one of the first things that pops into my head. I know you have a herniated disc, but I really feel like your weight is probably the biggest enemy your back has right now and am wondering if you’re still on the right track. I fell waaaaay off track in January/February because I had a lot going on which made it almost impossible to eat right but have finally gotten back to eating well and exercising. Anyway, sorry for the off topic reply but figured this was where you might see this reply (versus posting it on something from a week ago).

You know something? I haven’t stepped on the scale in awhile. I fell off the wagon over the holidays and have spent the last 3 months coming off of Paxil. I’m not feeling sick from it anymore cause I’m using that Fisher Wallace Stimulator but my body chemistry is in need of some time to stabilize. My last dose of Paxil is Friday and I’m so locking forward to that.

I’ve been walking a few times a week and eating less, so that’s good. I haven’t weighed myself because I don’t want to end up discouraged if I’m not losing right now.

The issues with my back are certainly made worse by my weight but not caused by it. Truthfully, I need surgery but never had it done. 99% of the time I’m fine but something as simple as stepping wrong or working over my head can cause serious pain.

Walking is the best thing for me and I’m trying to get in as much as I can without overdoing it.

I’m not going to focus as much on the scale until I’m done withdrawaling from my meds. They played a big role in my weight gain and I’m going to give myself some time to balance out before I jump on the scale to track my progress. Does that make sense?

Good for you though, it’s not always easy getting back on the weightloss or healthy eating wagon. Hope all is okay on your end and thanks for the question… ☺