This is what withdrawing from #Paxil is doing to me -

Why Creativity is Great For Kids

A MASSIVE and IMPORTANT Update for the last couple of days

This is what withdrawing from #Paxil is doing to me


I wanted to touch base and let you guys know where I’ve been. Since last Thursday, I’ve been really, really struggling both physically and emotionally. I was doing pretty good, or so I thought.

For most of the last 90 days or so, I was going okay. I would feel changes each time my dose was reduced but for the most part, I adjusted well.

When I took my final dose last Thursday, I thought I was going to be free. Instead, I find myself struggling more than I ever have before. To be clear, I’m not struggling with Depression, the Fisher Wallace Stimulator I’m using is helping out a great deal on that end.

The problem I’m having now is how my body is reacting to no longer having the Paxil in its system at all.

To give you an idea of what I’m experiencing, I wanted to be brutally honest about what’s happening to me. It’s weird and frankly uncomfortable to talk about but I’ll be damned if I don’t see something positive come from this nightmare. Here are a few of the things that are happening to me.

I’ve never been a crier before. There’s nothing wrong with crying, in fact, I think it shows a great deal of strength and courage to let one’s emotions come clean like that. The problem I’m having is that I cry at the drop of a hat and for no reason at all.

I’ve been fighting against that because there’s no reason for me to be crying and I didn’t want to freak the kids out. They’re so sensitive and I don’t want them to worry that somethings wrong with me. They have enough on their plates already.

Fighting against this urge to cry was making me physically ill. 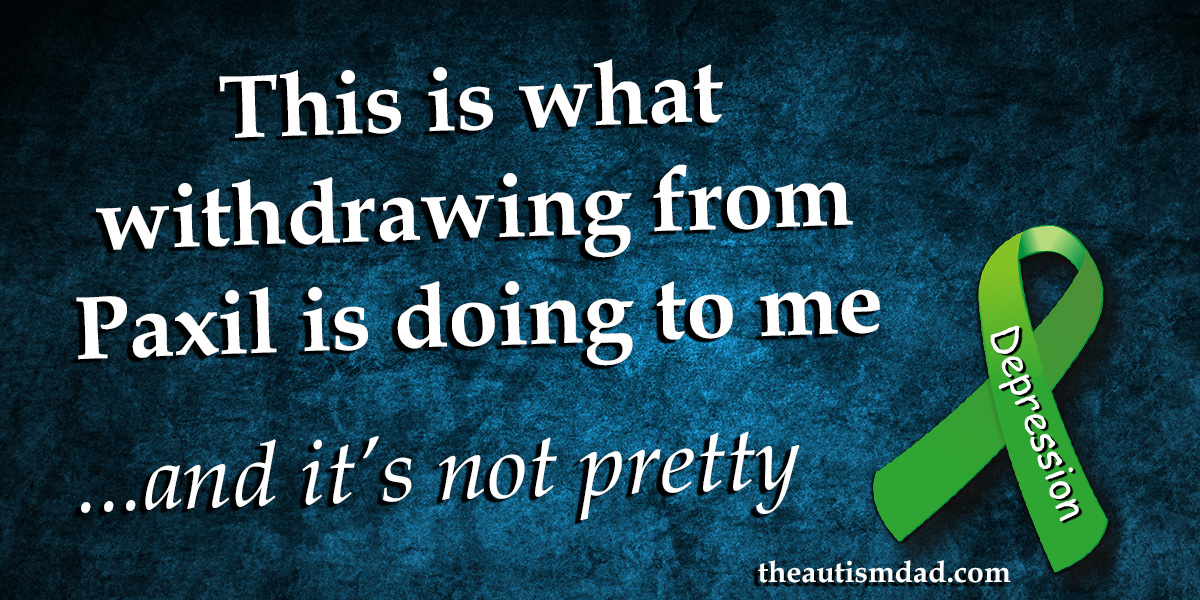 My wife told me that I have to stop fighting it and ride the wave. This means that rather than fighting to banish what I feel is an inappropriate response to literally anything right now, I need to embrace it. This means if I become overwhelmed by the urge to cry, I need to let myself cry. Obviously, there’s a time and a place but when I’m at home, I’m supposed to just let it out, even if there’s absolutely no reason for me to be sad.

This was and remains excellent advice because when I let myself cry, even for no reason at all, once it’s out, it’s gone. I feel a bit better afterward and it’s helping to relieve some of the constant nausea.

I was on Paxil for a very long time, at least 5 or 6 years. I know I felt emotions during that time but I realize now that they were seriously abridged. It’s like watching TV for years. I can watch all the same shows I do now but until last Thursday, I was watching on a tiny, muted, black and white screen. All of a sudden, that tiny black and white screen became a 65 inch, 4k – OLED monster screen and it was instantly overwhelming.

Maybe that’s a stupid analogy but it makes sense to me. It’s like living in a black and white world for a long time before one day waking up to everything being brightly colored and much more intense.

Sweet mother of God, I miss sleeping. Being an Autism parent can mean that sleep is tough to come by on a good night. I’ve been dealing with chronic sleep deprivation for many years but this is different.

I can’t fall asleep now, even when the kids are asleep. If I do fall asleep, I have insanely vivid nightmares. It’s awful. It’s so bad that I actually miss being sleep deprived because of the kids.

Sick to My Stomach

One of the more difficult parts of this struggle for me is the constant nausea. I feel sick to my stomach all the time. I’m barely eating anything at this point, which is helping lose the weight that Paxil caused me to gain but that’s neither healthy or sustainable.

The only positive to come from this is that it’s sorta hit the reset button for me. I have zero desire to stress eat and when I do eat now, my portion sizes are much smaller because I can barely stomach anything.

I’m also experiencing random but significant bouts of dizziness. There are times I feel completely disoriented and can’t seem to feel like I’m firmly planted on the ground. I don’t know if that even makes sense but it’s the only way my mushy brain is able to describe that.

The last thing worth sharing is something I’m calling, Mushy Brain.

It’s a really bizarre feeling and it centers around feeling like my brain is mush. That sounds super weird but mushy brain makes it hard to think and that’s very difficult for me to cope with. I’m a thinker. I’ve always been a thinker and not feeling like I can think clearly or even coherently is very frustrating.

At this point in time, I’m waiting to hear back from my doctor. I mentioned in a previous post that I spoke with a specialist, who happens to be Gavin’s longtime psychiatrist and I may have no choice but to start taking Paxil again.

As counterintuitive as that sounds, the science is solid.

Going back on would eliminate everything I’m experiencing since withdrawing. Once I accomplish that, I would begin to reduce my dose by a much, much smaller amount, over a much longer period of time.

I’ve already spoken to my doctor about this being a possibility. I would need the lowest dose pill possible, which I think is 10 mg. I would have to literally crush the pill into a powder, cut it like cocaine and measure it with a tiny drug scale, in order to reduce the dose by much smaller increments. Part of me finds extreme humor in that and part of me finds that really sad.

That’s my fallback plan for right now. No part of me wants to ever put Paxil into my body again, so I’m inclined to push through the withdrawal. At the same time, there has to be a line in the sand. I can’t go on like this forever and I know Lizze is worried.

I’m hoping that as I move forward, things will be getting better. If they don’t, and this is entirely possible because these side effects can last for days, weeks and even months, I’ll seriously consider going back on and coming off slower.

This is my story right now. I would never discourage anyone from using antidepressants under medical supervision. They are a very important part of depression management. I’m only suggesting that if Paxil is something you’re considering, do your research. As I mentioned in a previous post, our psychiatrist (also an addiction expert) explained it can be like withdrawing from heroin for many people.

As crazy or unbelievable as that sounds, I’m here to tell you, I’m one of those people who’s body withdraws from Paxil like it was heroin. Educate yourself before taking an antidepressant. Know your options, ask questions and be honest with your doctor.

How long did it take you to finally feel normal again? I was only on Paxil for a little less than 2 months when I decided I wanted to get off of it. I was only on 10mg and figured I could get myself off without a doctor. I was very wrong. I lowered the dose myself to 5mg for 5 days then just stopped taking it. 3 days later, I started having withdrawal symptoms. It has now been a week of constant nausea, daily vomiting and dizziness. I am miserable and can not enjoy doing anything because I feel so sick. My doctor is closed for the weekend, but I will call on Monday I don’t know what to do. I am thinking of taking Paxil again until I can speak to the doctor. I can’t take this anymore.

I’m so sorry to hear that. I was in 40 for about 7 years and I took 3 months to come off completely. I was sick for 6 months. A psychiatrist who specialize in withdraw said that for many people its like coming of of heroin. Please be careful and talk to your doctor.. Feel better soon.

Withdrawal from antidepressants and similar medications is very real. I highly recommend those who need antidepressants to use it but to wean off of it VERY carefully and slowly or use some sort of placeholder in the meantime as you transition.

Sounds hellish, Rob! I can speak to the mushy brain thing. It’s called brain fog. At least, it sounds like it causes the same thing, a difficulty in thinking. It’s almost emotionally painful to push through it too. Things that help it diminish would involve eating all right, sleeping all right, and exercise. But you can’t do all of those right now with your withdrawal.

For a short term way to get through your mushy brain, you can try mild doses of caffeine. Anyway, if it’s part of your withdrawal symptoms, it shouldn’t last a lot longer. I assume you will follow your doctor’s orders. Good luck!

If you are a week into it, why would you consider starting over? Even at a smaller dose? If the heroin analogy holds true, you should be days from having this completely out of your system. Starting over now might provide tempoary relief, but there is no magic bullet to detoxing.

I have watched tons of people prolong drug use to avoid exactly what you are going through…I would look at the finish line before going back on anything.